Though the rigours of international cricket take a toll on England batsman Kevin Pietersen from time to time, he is eager to continue playing till the 2015 World Cup. 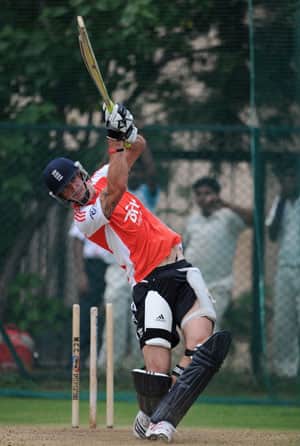 Though the rigours of international cricket take a toll on England batsman Kevin Pietersen from time to time, he is eager to continue playing till the 2015 World Cup.

Pietersen, who is back in the England ODI squad for the five-match series in India after he was rested in the home series last month, knows that he will have to consistently perform to be playing in the next World Cup in Australia and New Zealand. His form in the Tests has been intact but his last ODI century came in November 2008.

“I don’t know how many times I need to say it till you stop asking the questions,” Pietersen was quoted as saying by ESPNcricinfo. “I want to continue playing until the 2015 World Cup, and then we will reassess. No one is ever guaranteed their place – for their country, for their county, for their club side,” he said.

“There is a lot of different permutations and different things that can happen. It is just a case of enjoying every day, and also realising how fortunate we are. If there is any place you want to come and play One-Day International cricket, it is here in India,” Pietersen said.

The Stylish batsman says the break from the sport helped him immensely as the intense training routine was getting monotonous for him.

“I wanted to take a complete break, and get that bug back for training. That is the first break I have had without an injury for England. It was much appreciated.”

“The hardest part of playing all three forms of the game is turning up on training day and doing warm-ups — I think it takes a couple of years off your career. To not have to turn up to training days was an absolute blessing. But you do miss the cricket, participating and competing — because we are all competitors,” he said.

Pietersen plans to deal with his wrist injury after the India your.

“I have got something in my wrist. I had a cortisone injection a few days ago, and cortisone just before I left. It is just a case of getting through this tour and seeing where we are at the end.” (IANS)

Ravi Rampaul eager to perform away from home