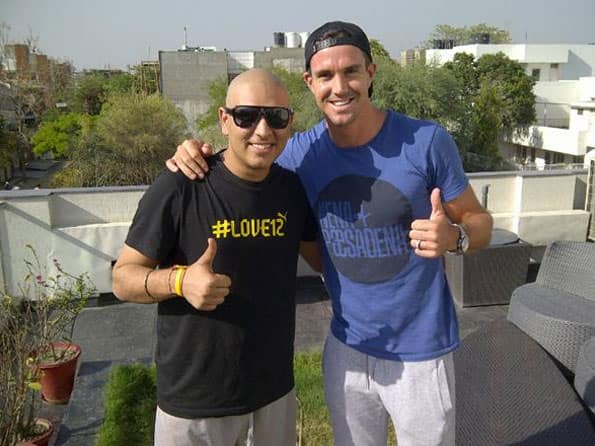 Kevin Pietersen (R), few days ago, had backed Yuvraj Singh to fight through the difficult period of his life

Yuvraj, who is recuperating from a rare germ cell cancer, returned home on Monday after undergoing treatment in the United States.

“Great to hook up with the pie chucker…,” tweeted Pietersen after meeting Yuvraj.

He also posted a picture clicked with Yuvraj, along with the tweet.

Pietersen, who is currently playing for Delhi Daredevils in the Indian Premier League, had a few days ago backed Yuvraj to fight through the difficult period of his life.

“I was lucky enough to speak to Yuvraj last night before his return from London. As a sportsperson, our job is to accommodate and follow our fellow cricketers in their difficult times. Yuvraj is a fighter and he will fight through this period also,” the Englishman had said.

Yuvraj had a personal rivalry with Pietersen during the India-England Test series in India in 2008 when the Englishman had referred him a pie chucker for his innocuous bowling.(PTI)