James Whitaker said there's no way that batsman Kevin Pietersen will ever play for England again.

England‘s national selector James Whitaker has reportedly said there is no way that former star batsman Kevin Pietersen will ever play for the national side again. The South African-born England star was sacked by England in the wake of the last Ashes tour and made reconciliation unlikely by releasing a book in October which contained attacks on England’s national cricket board and several of his former teammates.

However, Pietersen’s hopes of re-call got reinforced following Alastair Cook was discharged off his captaincy responsibilities. Quashing all such rumours, Whitaker said that there was no way that Kevin Pietersen would ever get back into an England team, adding that there was no interest from their point of view in going backwards, News.com.au reported.

He further said that they parted company with Kevin in January because throughout the ECB management, from the dressing room up to the board, it was felt that it was the right decision to go in a slightly different direction.

They have got an exciting group of young players and Morgan was excited to be working with those guys as he wanted to fulfill his team’s potential, he added. 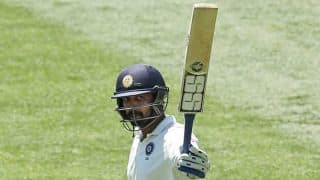