Rajasthan raced to 77 for one in nine overs.

The Indian Premier League (IPL) 2014 match saw Rajasthan Royals firmly in control of the proceedings with Ajinkya Rahane looking in firm control of proceedings. The spinners came on and the the batsmen went after the bowling. Kevon Cooper was promoted and the batsmen went after the bowling with some lusty blows which saw two sixes of his blade and more runs flowed of the blade with Imran Tahir’s leg-spinners also leaking boundaries of the third over. Cooper was sent to do a job and he was doing it to perfection. Catch live ball-by-ball updates of Rajasthan Royals vs Delhi Daredevils, IPL 2014

The second over was bowled by Rahul Shukla and two back-to-back boundaries followed. First, the bowlerd sprayed a bad delivery down the leg side, which clipped Rahane’s pads and raced to the fine leg boundary. The second ball was again drifting down the leg side and Rahane eased into the shot, playing a well controlled flick and the crowd was in raptures. The last ball of the over was over-pitched and Rahane played a majestic front-foot drive for another boundary. Catch Live Updates of the Rajasthan Royals vs Delhi Daredevils, IPL 2014 match here

Delhi Daredevils won the toss and skipper Kevin Pietersen elected to field against Rajasthan Royals. To everyone’s surprise, Shane Watson sat out due to injury and Steven Smith was handed over the captaincy for the home side. The Ahmedabad weather though has played spoilsport and the covers were on and as a result, the play had a delayed start. 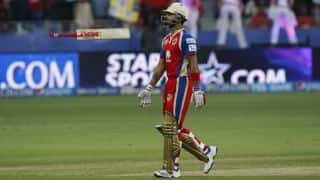 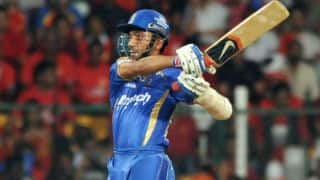