Kieron Pollard's approach towards life is very similar to his cricket — uncomplicated. He says the stint with Mumbai Indians has made him a better cricketer. While cricketers across the world love to make right noises about how much they love playing Test cricket, the 26-year-old Mumbai Indians all-rounder is very practical about choices he has made and firmly stands by it. 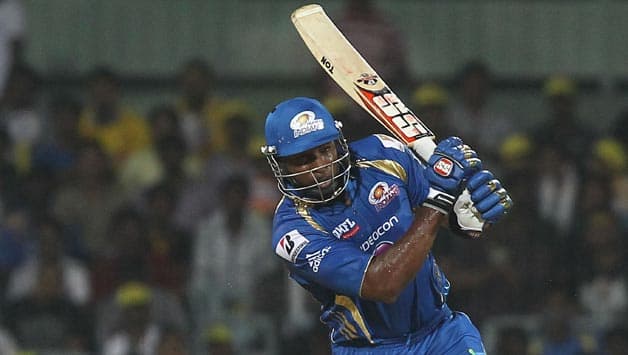 Kieron Pollard‘s approach towards life is very similar to his cricket — uncomplicated. He says the stint with Mumbai Indians has made him a better cricketer. While cricketers across the world love to make right noises about how much they love playing Test cricket, the 26-year-old Mumbai Indians all-rounder is very practical about choices he has made and firmly stands by it.

“You make decisions in life. The point when I started playing top-level cricket to this day, T20 is the cricket that I have made my name in. I don’t have any regrets having played only 24 First-Class matches till date. It is a business as well and I have to look after my family and live as well,” Pollard told PTI in an exclusive interview.

Apart from being a star performer for MI in IPL, Pollard has played for Somerset in England, Big Bash in Australia, Bangladesh Premier League and the Caribbean Premier League.

But does the tag of T20 freelancer hurt him, Pollard gave a pointed reply, “If people want to call me T20 freelancer, that’s their opinion. I can’t do anything about it. If I try to change everything, I will be trying to change the whole world. For me, it’s just a matter of what I am supposed to do and that is playing whatever format I get to play.”

The giant of an all-rounder felt that his stint with Mumbai Indians has made him a better cricketer.

“Four years with Mumbai Indians has been a learning experience for me. The best part is that players come and go in other teams but at Mumbai Indians, the core of the team has been same for the last four years. We have enjoyed each other’s success,” said Pollard, who has played 85 One-Day Internationals (ODIs) and 37 Twenty20 Internationals for his country.

On the technical aspects, Pollard believed that he has become a better batsman against slow bowlers during his stint with Mumbai Indians.

“Earlier, whenever I would come into bat, the opposition captain would immediately bring in a spinner. It has changed now as they normally don’t bring a spinner when I come into bat. Although I still get out but, if the slow bowlers keep it in my arc, I am ready to hit it out of sight. My regular visits to India has given me a lot of confidence to play in front of big crowds,” Pollard added.

Talk of playing for Mumbai Indians and the importance of Sachin Tendulkar‘s presence comes up for discussion.

“Sachin has helped me become a better cricketer with a lot of technical inputs but I would prefer keeping it to myself. For me, it’s a sheer joy watching him enjoy those grueling training sessions even at this age. His work ethic is something that I have always respected.”

They have played together for the West Indies side but by Pollard’s own admission, he doesn’t get intimidated while bowling to Chris Gayle.

“I have got Gayle out during Big Bash. Whenever I am bowling to Gayle, I always back myself to get him out. I really don’t lose my sleep over whether I would go for 20 runs when he [Gayle] is batting.

“But yes, if I am hit for 20, I know that I am not the first one to get that treatment from him and certainly not the last one either,” smiles Pollard while speaking about Jamaican marauder.