Kieswetter recalled to the England squad for T20

Kieswetter recalled to the England squad for T20

Craig Kieswetter believes he is a better player on his recall to the England squad and is looking forward to proving the point in the upcoming short-form matches against Sri Lanka. 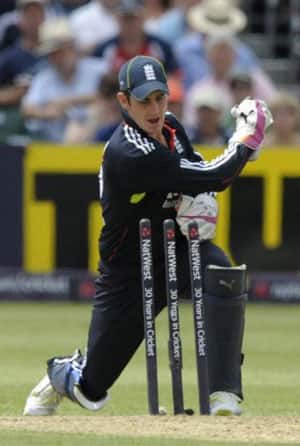 Craig Kieswetter believes he is a better player on his recall to the England squad and is looking forward to proving the point in the upcoming short-form matches against Sri Lanka.The South Africa-born wicketkeeper-batsman endured a rollercoaster six months at the start of his England career last year.

The Somerset player struck a century in only his third one-day match against Bangladesh in February 2010 and three months later was named man of the match for his 63 in England’s World Twenty20 final win over Australia in Barbados.

But from those heights his England career nosedived, with just 121 runs in eight ODI innings against Australia and Bangladesh in England.He was dropped from the squad and a recall saw him manage a mere six and 16 in a couple of Twenty20 appearances for England against Pakistan in Cardiff in September.

Kieswetter, though, did not sulk but instead worked on improving his batting and keeping with coaches Graham Thorpe and Bruce French respectively, both former Test players, during a stint with the second-string England Lions.Now he has leapfrogged rival gloveman Steven Davies and displaced Test keeper Matt Prior — behind the stumps at the World Cup — in the England squad and is set to make his return in the lone Twenty20 international against Sri Lanka at Bristol on Saturday.

“I’m chuffed to bits to be back in the set-up after a bit of time out. It’s the first day today and I’m really excited,” Kieswetter said on Thursday.

“It was great to win the Twenty20 final but my performances against Australia and then Bangladesh at home didn’t warrant me being in the side.”In international cricket, if you don’t perform, you get dropped. That is what happened to me.”

He added: “I worked really hard with Graham Thorpe and Bruce French on the Lions trip and I’m really happy to be back.

“There have been a few things, a few technical issues and mental things. I’ve worked on my batting with Thorpey and then with Frenchy on the wicket-keeping side.

“I am definitely seeing the positives from those sessions.

“With Thorpey, it was mainly about trying to work on four-day batting and trying to set good habits and good routines into my batting and they’ve fed through into the one-day stuff.

“I’ve been a bit more solid in defence because I know I’ve got the attacking game.

“Look, I’m not going to change myself too much. I’m going to continue to be attacking. That’s my role, my natural game but I’m a lot more tight, a lot more controlled with the way I play.”

Meanwhile, Stuart Broad, England’s new Twenty20 captain in succession to the dropped Paul Collingwood, looks set to lead the side for the first time on Saturday despite a bruised heel in the drawn third Test against Sri Lanka at the Rose Bowl earlier this week.

Craig Kieswetter endured a rollercoaster six months at the start of his England career last year.

Indians will be uncomfortable facing me: Tremlett