Cotton made her international umpiring debut last season in the White Ferns series against West Indies Women, stood in an ICC World T20 Qualifier in Fiji, and has been a member of the NZC Reserve Umpire Panel since 2016-17.

New Zealand umpire Kim Cotton has been selected for the ICC Development Panel of Umpires. Cotton, a lawyer from North Canterbury, made her international umpiring debut last season in the White Ferns series against West Indies Women. She also stood in an ICC World T20 Qualifier in Suva, Fiji last week, and has also been a member of the NZC Reserve Umpire Panel since 2016-17.

It was a pleasant surprise when I was notified and I am thrilled by the appointment. I really enjoy umpiring cricket and this appointment will provide me with new opportunities, which is really exciting, said Cotton to New Zealand Cricket.

The ICC Development Panel of Umpires is seen as a pathway for Associate and Affiliate Nation umpires as well as female umpires hoping to gain experience.

NZC Match Officials Manager, Sheldon Eden-Whaitiri said Cotton s selection is great reward for her strong performances in both domestic and international cricket: Kim is a great example of the pathway for female cricket umpiring in New Zealand.

After launching her career in Canterbury club cricket, she worked her way through the NZC system starting at the Women s Under 21 Tournament, through the Hallyburton Johnston Shield and Women s Super Smash before making her Women s T20 International debut last season.

The White Ferns were quick to congratulate Cotton.

Cotton, already a member of the NZC Reserve Umpiring Panel, becomes the fourth female to join the ICC Development Panel and said she is looking forward to the busy cricket season ahead. She is now eligible to umpire ICC events such as Associate Men s internationals, ICC Regional Events, ICC Global Events, ICC Women s Championship and any other games the ICC deem appropriate. 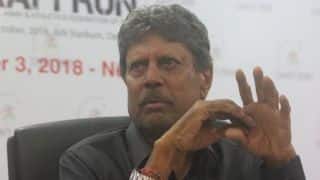