Delhi Daredevils are six down for 53 after the end of 12 overs.

Kings XI Punjab (KXIP) are in deep trouble in their Indian Premier League (IPL) 2015 against the Delhi Daredevils (DD). They are six down for 53 after the end of 12 overs. Thisara Perera was the last man to get out. David Miller is KXIP’s only hope, is currently batting. Live scorecard: Delhi Daredevils vs Kings XI Punjab, Match 31, IPL 2015 at Delhi

Earlier, they had lot Virender Sehwag and Shaun Marsh in the first two overs. later, they got Wriddhiman Saha and Manan Vohra. Those breakthroughs put KXIP in further trouble. It was the start they did not want as they had lost four within the first five overs. Live Updates: Delhi Daredevils vs Kings XI Punjab Match 31, IPL 2014

Vohra was dismissed by Zaheer Khan, who is playing his comeback game. Vohra charged to him and edged it to the wicketkeeper. Later, Saha was also dismissed when he edged one from Nathan Coulter-Nile to the wicketkeeper. It was a big blow for KXIP, who are playing without the dangerous Glen Maxwell. Now, they need George Bailey and David Miller to come good.

Zaheer is in his comeback game and that has been a good performance from him. He dismissed Sehwag off the second ball of the game and has gone on to bowl very well for his team. 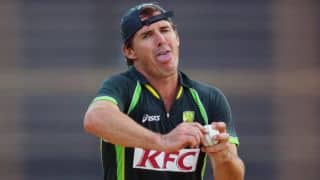