Pacers Morne Morkel and Umesh Yadav shared seven wickets between them as Delhi Daredevils restricted Kings XI Punjab to 141 for eight in their Indian Premier League match on Saturday. 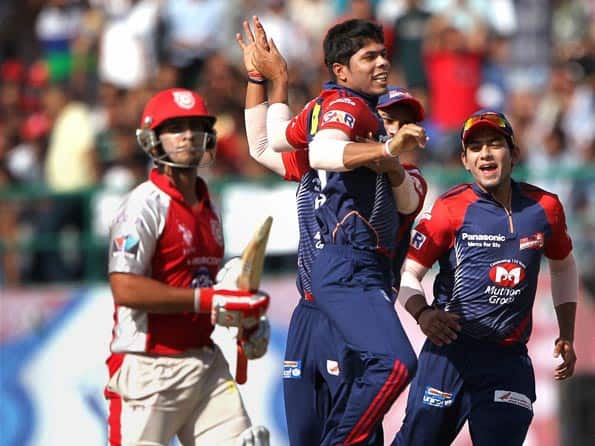 Pacers Morne Morkel and Umesh Yadav shared seven wickets between them as Delhi Daredevils restricted Kings XI Punjab to 141 for eight in their Indian Premier League match on Saturday.

Morkel had figures of four for 20 while he was well-supported by Umesh who ran through Punjab’s top-order with three for 19.

Electing to field, Delhi bowlers stuck to their task from the onset, barring a few overs in the middle, to stop Punjab from posting a big total at the HPCA (Himachal Pradesh Cricket Association Stadium) stadium.

Siddharth Chitnis top-scored for Punjab with a 32-ball 38 and, together with Azhar Mahmood (36), added 57 runs for the fifth wicket which was the only highlight of the hosts’ innings.

Punjab were off to a worst possible start in their must-win last league fixture as they slumped to 20 for four inside the mandatory powerplay. The hosts were never allowed to get off the hook by the Delhi bowlers.

Punjab lost opener Mandeep Singh (0) in the second over of the match to Umesh, who induced an edge that was taken by wicketkeeper Naman Ojha.

Skipper Adam Gilchrist (9) departed in the fourth over bowled by Umesh when he went for the pull but only ending up getting a top-edge that was lapped up by Varun Aaron at mid-on.

Paul Valthaty’s miserable run in the tournament continued as he was caught by Irfan Pathan at third-man off Morkel while trying an upper cut.

Umesh made the matter worse for the hosts as he got the dangerman David Hussey (3) caught at mid-on by Pathan to leave Punjab tottering at 20 for four.

With his team struggling, Chitnis strode to the crease and responded to the situation by running a few quick singles and hitting the occasional boundaries.

Chitnis, along with Mahmood, tried to take Kings XI to a comfortable position but the Maharashtra player holed out to fine-leg fielder Pathan off the bowling of Andre Russell after being involved in a 57-run stand.

Chitnis’ 32-ball knock was laced with one six and five fours.

After the dismissal of Chitnis, Mahmood and Gurkeerat (26) tried to provide the late flourish, but the Delhi bowlers were equal to the task.

Ryan Harris accumulated 15 runs off the last over bowled by Umesh to take his team past 140. (PTI)