Hello and welcome to CricketCountry’s blog of Indian Premier League (IPL) 2016 live auction for Kings XI Punjab. The auction begins at 9.30 am and we at CricketCountry are privileged to bring you live updates of the players which are up for grabs in the auction. We have eight blogs designated for all the eight franchises and one consolidated blog for all the teams which will encompass the major happenings of the auction including developments in the event and briefs about all the eight teams. The Kings XI Punjab blog is dedicated to bringing all the updates about the players Punjab franchise will be buying in the auctions and all the major news concerning the team. Live Updates & Blog, IPL 2016 Auction: List of sold & unsold players & teams in Indian Premier League 9 auction

LIVE UPDATES, IPL AUCTION 2016: Farhaan Behardien is one of the four players under the hammer for a third time. SRH, KXIP go for him and it is KXIP to bag him for Rs 30 lacs.

Kings XI Punjab so far in the auction:

Great to have Swapnil Singh in the team. Congratulations! #IPLAuction #KXIP pic.twitter.com/8gguYevqt3

LIVE UPDATES, IPL AUCTION 2016: Swapnil Singh under the hammer with abase price of Rs 10 lacs. He finds a bidder only in the Kings XI Punjab and they take him at the base price. A total of five buys for this franchise so far in the auction.

LIVE UPDATES, IPL AUCTION 2016: Arman Jaffer in for a second time. Bases at Rs 10 lacs and Kings XI Punjab makes an opening bid. No other franchises stepped in and KXIP easily bought the Under-19 player for Rs 10 lacs. He scored 64 runs fro 55 balls in India’s 197-run victory against Namibia in the ongoing Under-19 World Cup at Bangladesh.

We’re just a couple of minutes away from LUNCH BREAK at Bengaluru. Kings XI Punjab has three players in their kitty so far in this auction!

LIVE UPDATES, IPL AUCTION 2016: Kyle Abbott base prices Rs 30 lacs. The bids come in from Royal Challengers Bangalore and Kings XI Punjab. Both the franchises have been really slow today, have bought just two players each so far. Rs. 80 lacs bid, in favour of RCB. The Kings are seen discussing, yes they will continue. RCB too, Rs. 90 lacs against KXIP. Abbott earlier played for CSK in the previous editions. However, did not get too many opportunities. Now, Rs 140 lacs from RCB. Will KXIP continue bidding? Yes, they will. Rs. 170 lacs against RCB. The bidding continues, which side will bag Abbott? RCB withdraws from the bid, meaning Abbott SOLD to KXIP for Rs. 2.1 crore.

LIVE UPDATES, IPL AUCTION 2016: The young Australian Marcus Stoinis under the hammer, bases Rs. 30 lacs. The bids come in from Kings XI Punjab and Rising Pune Super Giants. And PUnjba have their second player after Mohit Sharma, FINALLY. Stonis bags Rs. 55 lacs. Good buy, KXIP! The beautiful Priety Zinta is all smiles, shows she is happy with the move.

One of the most consistent bowler in T20 cricket, Mohit Sharma, welcome to the lions den! #KXIP #IPLAuction pic.twitter.com/Lr6KUH64Dv

Sunrisers Hyderabad surely enjoyed the fight for Mohit Sharma, better luck in the next bid 😀

LIVE UPDATES, IPL AUCTION 2016: Mohit Sharma under the hammer now, with a base price of Rs 1.5 crore. Kings XI PUnjba’s owner makes the opening bid, Kolkata Knight Riders from the otehr end. Rs 320 lacs, in the favour of KXIP. KKR goes ahead, the bidding is up Mohit Sharma, who has played Chennai Super Kings in the last few season. He is probably one of the most trusted bowlers by Dhoni in the T20 format. Will it be KXIP or KKR? Rs 480 lacs fro KXIP, KKR backs out now. Sunrisers Hyderabad brings in a new bid, Rs 500 lacs! Kings XI Punjab not giving up, Rs 550 lacs. Sunrisers back out, and Mohit Sharma SOLD to Kings XI Punjab for Rs 6.5 crore.

This is the ninth season of IPL and Kings will certainly want to make this a memorable tournament  for them by bettering their last year’s performance where they finished last. There is a famous proverb that well begun is half done and hence grabbing some of the finest cricketers through the auction is one of the brilliant ways to kick-start the tourney. 351 players will be auctioned, out of which 116 can be bought at max. Can KXIP succeed in laying their hands on some great batters and bowlers who are up for grabs today? What will their strategy be for this season’s auctions? Will they go for a rounded approach of buying decent players for both the batting and bowling department or will they try to strengthen one particular aspect of their team? We will get to know all this in today’s auction.

This year, Kings have retained 14 and released eight players. Virender Sehwag, George Bailey and Thisara Perera are few of the major players they have released. On the other hand, some of the key cricketers they have retained include Glenn Maxwell, Shaun Marsh, David Miller, Gurkeerat Singh, Rishi Dhawan, Murali Vijay and Mitchell Johnson. With them having released the swashbuckling Sehwag, they will be looking forward towards picking another explosive top-order batsman in their ranks to complement Marsh unless they go for a different strategy. 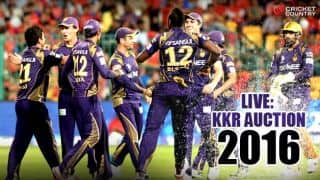 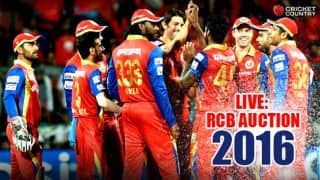