Punjab will be on the backfoot after being thumped by KKR in the 1st qualifier.

In what will be a battle for the team that will face Kolkata Knight Riders (KKR) in the final of the Indian Premier League (IPL) 2014, the No 1 and No 3 teams of the group stages of the competition will be involved in an intense battle.

Kings XI Punjab (KXIP) were in rampaging form in the round-robin games of the tournament. They went through to the knock-out stages in a breeze. Glenn Maxwell simply overpowered opponents and their opponents in the Qualifier 2, Chennai Super Kings (CSK) bore the brunt of his big-hitting twice. Maxwell’s relentless clubbing tore the Chennai attack apart. After hitting a low patch in recent games, the Australian would be eying Chennai’s spinners to get back to run-scoring ways.

Punjab’s opponents Chennai on the other hand also had a relatively unblemished record in the group stage. Chennai lost three consecutive games towards the end but in knock-out games, they are a different beast compared to the rest. MS Dhoni’s instinctive gambles combined with their power-packed batting line-up means opponents can never be sure even scoring 190-200.

Their performance in the eliminator against Mumbai Indians would have come as warning to Punjab. Chennai just blew away their opponents despite having to chase a stiff target. Chennai have been in the latter stages of the competition in every year of the IPL and have been to the final in five out of six occasions. This vast experience might just be too much to handle for Punjab, who have a new look but inexperienced team.

George Bailey’s team though will be buoyed by the fact that their previous two encounters against Chennai went in their favour. After the Indian batting contingent showcased their abilities early on, Punjab’s young Indian bowlers have come the party. Chennai’s settled unit will hold all the aces which will see the departure of another team in IPL 7. 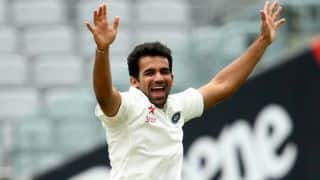