So far Kings XI Punjab have been unbeaten at Holkar Stadium, and they will aim to finish off their stay with a win against a resurgence Mumbai Indians.

Head-to-head tally between the two teams stands equal with both sides winning 9 games each out of 18. This will also be the first time that Kings XI Punjab and Mumbai Indians clash at the iconic city of Indore. Kings XI Punjab in their last match were guilty of giving the match away with wickets tumbling at regular intervals. Only Manan Vohra kept KXIP in hunt, making a 50-ball 95 which went in vain. It is highly important for Hashim Amla, Glenn Maxwell and David Miller to come good for them, with the tournament getting intense.

Eoin Morgan, in all likelihood, will be replaced by Marcus Stoinis. With no major domestic batsmen in their line-up, the foreign recruits become crucial. Wriddhiman Saha would want to get into the thick of things with the bat. Their bowling too has been good in parts but lack consistency overall.

Mumbai Indians, on the other hand, have hit the gas pedal on the right time. The likes of Rohit Sharma, Nitish Rana, Krunal Pandya and Hardik Pandya have been in good nick of late. Rana in particular has single handedly been Mumbai Indians batsmen of the season. Both Krunal and Hardik have displayed composure and aggression in times of need, while Rohit Sharma found his mojo in the last match. Kieron Pollard’s contribution to the side cannot be undermined after his match winning knock against Kolkata Knight Riders (KKR).

Their bowling duties have been guided by the wily Lasith Malinga and Harbhajan Singh. Despite being taken to the cleaners against Lions, Malinga will continue to spearhead their attack. Mumbai Indians rely heavily on Mitchell McClenaghan to provide early wickets and restrict the flow of runs in the death overs along with the ever-dependable Jasprit Bumrah. Add to the mix Krunal and Hardik and this makes for a potent attack. 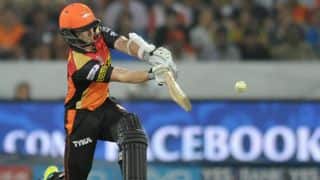