Earlier, Kings XI Punjab lost another set batsman Virender Sehwag for 47 as he was caught by Nathan Coulter-Nile off JP Duminy’s bowling. Sehwag’s wicket came off an over after Wriddhiman Saha’s. Sehwag looked disappointed but wrecked havoc before departing. He hit four fours and two sixes.

Wriddhiman Saha was bowled out for 39 by Amit Mishra as Kings XI Punjab lost their second wicket. Wriddhiman was unable to read the ball and it struck the middle stump. Virender Sehwag  was unbeaten on 40. Wriddhiman and Sehwag were going strong and looked dangerous. Murali Vijay was dismissed for  19 off 18 deliveries, just when he looked to set with Virender Sehwag. DD were going just a little over six an over at the moment. Angelo Mathews struck in his very first over after Vijay top edged the ball straight to JP Duminy standing at mid off. Whereas, Sehwag looked unbeatable, as he completed 4,000 runs in Twenty20 (T20) cricket. He is the seventh Indian to complete 4,000 runs. Sehwag also went past Chris Gayle for the most boundaries in IPL. Live Scorecard: KXIP vs DD IPL 2015 Match 10

Kings XI Punjab (KXIP) won the toss and elected to bat first. They have named an unchanged side. Delhi Daredevils (DD), on the other hand have Dominic Joseph in place of Jaydev Unadkat. KXIP will be looking to build on their win from Mumbai Indians (MI) from the previous game and DD will be looking to get their first ever win in the IPL 2015. KXIP vs DD, Free Live Cricket Streaming Online on Star Sports: IPL 2015, Match 10 at Pune 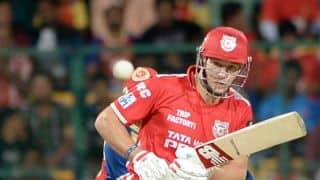