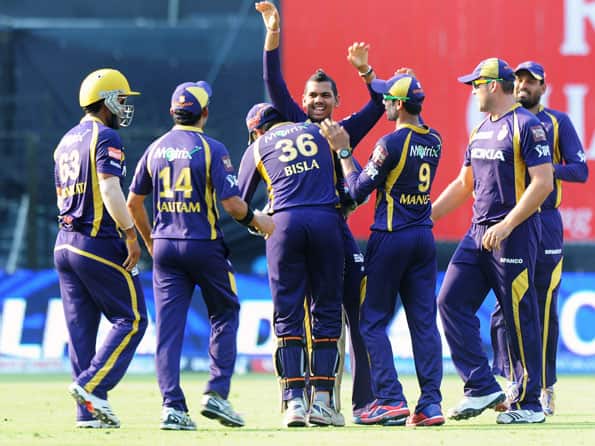 Put into bat, Kings XI batsmen failed to read Narine’s deliveries as the Trinidad spinner had figures of 4-0-19-5 to show for his efforts which also proved why KKR bought him for a handosme price of USD 700,000.

The Trinidad spinner after being introduced in the third over took two prized scalps of Adam Gilchrist (5) and an in-form Shaun Marsh (1) in two overs to dent the Kings XI progress.

Gilchrist along with his new opening partner Mandeep Singh started positively with the duo racing to 14 for no loss in two overs but Narine’s spell (2-0-5-2) cost them dear as they were reduced to 21/2 in 4.2 overs.

Gilchrist tried to hit Narine across the line only to balloon it up as Manoj Tiwary at the short cover took an easy catch.

Narine then breached through Shaun Marsh’s defence with a beauty that straightened after pitching.

Kallis did a fine job, rather quietly, at the other end, conceding 11 from his three overs to further unsettle the visitors plan.

In between, Rajat Bhatia did an excellent job with his slow medium pace returning with two for 14 in the slog overs as the Kings XI boys struggled to find a parternship going.

Narine returned to haunt the visitors in the 18th over, picking two wickets as his difficult off-spin with intelligent mix of the wrong ones foxed the Kings XI batting.