Kings XI Punjab have hit back well in the IPl 2014 Qualifier against Chennai Super Kings. In 15 overs, Chennai are 155 for six and they are chasing 227 for victory. Ravichandran Ashwin and MS Dhoni are in the centre.

David Hussey was dismissed when he tried to pull one through mid-wicket but offered a chance to Virender Sehwag standing there. This happened in the 13th over and earlier in that over, Ravindra Jadeja hit one to third-man and was caught. Sandeep Sharma then came on to bowl in the 14th over and he started off well by giving singles and finished it well.

Karanveer Singh was then brought on for the 15th over and Dhoni was looking to attack. He did charge once and missed, but got his bat inside in time.

Earlier, Chennai Super Kings won the toss and predictably decided to field first. Chennai have retained the same team that cruised to a seven wicket win against Mumbai Indians in the eliminator. Kings XI Punjab on the other hand have brought in their strike bowler Sandeep Sharma, who replaces Rishi Dhawan. Virender Sehwag smashed a ton and took Punjab to a formidable 226 for six. Suresh Raina then smashed 87 off 25 balls to power a brilliant start. 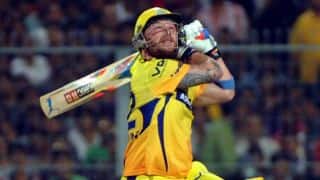 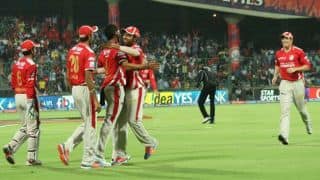