Full details of when, where and how you can watch and follow the IPL 2019 match between Kings XI Punjab and Kolkata Knight Riders.

Three IPL 2019 playoff spots have been sealed. One remains and four claimants. Two of them clash tonight. A defeat for either Kings XI Punjab or Kolkata Knight Riders will further diminish their faint hopes leaving the matters into the hands of other favourable results. A tricky spot which neither team would want to be in.

The teams are meeting after a gap of almost a month. The previous meeting was in March 27, 2019. Andre Russell had powered KKR to 218 and KXIP replied with 190. Since then, the two teams have seen turbulent times – a rollercoaster of sorts. KKR underwent a losing streak of six matches before winning against MI. KXIP have lost their last three encounters. High stakes, shaky form. Makes for a mouth-watering contest. 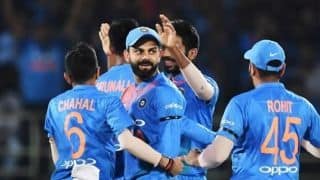