KXIP will look to end their losing streak against MI.

Kings XI Punjab (KXIP) take on Mumbai Indians (MI) in match 35 of the Indian Premier League (IPL) 2015 at Mohali. KXIP had beaten MI in the previous encounter at Mumbai by 18 runs. Despite a brilliant half-century by Harbhajan Singh, MI could not get over the line and as a result lost the match. Kings XI Punjab vs Mumbai Indians, IPL 2015 Match 35 Preview

KXIP and MI have been in complete opposite forms lately. While MI have built some momentum and registered back-to-back wins the last two games, KXIP have lost their last three games. KXIP’s batsmen have often let them down and as a result they have found it difficult to win as many matches as they would have wanted to. MI will hope that they can carry their momentum on into this game as well and not crumble like they did when the two sides had met at Mumbai. IPL 2015: Mumbai Indians favourite against struggling Kings XI Punjab

Catch the live telecast of the KXIP vs MI match on Sony Six and Sony Six HD for English and Set Max for Hindi commentary. The live streaming of the match is available on starsports.com. IPL 2015: Preparing for Harbhajan-like situations helped us defeat MI, says Karanveer Singh

Live streaming is becoming more and more popular as days go by. The beauty of this technology is that it can be accessed from absolutely anywhere. People can access Live Streaming on the mobile phone, laptops and personal computers as well.   IPL 2015: Schedule with venue details

Rohit Sharma gets engaged to his girlfriend of six years, Ritika Sajdeh 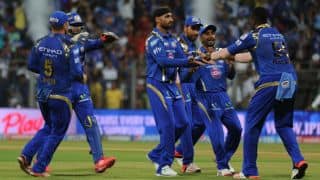