George Bailey and Akshar Patel are taking Kings XI Punjab are through.

Kings XI Punjab are within sight of victory against the Delhi Daredevils in the Indian Premier League (IPL) 2014 match at the Feroz Shah Kotla, Delhi. They are chasing 165 for victory and are 154 for five in 18 overs with George Bailey and Akshar Patel in the side.

Akshar faced Wayne Parnell in the 16th over. He cut one behind point for a four. Then a full delivery hit him on the foot and went for four. But the umpire gave it runs. The last ball of the over was flicked through fine-leg for four. Bailey then faced his first ball in the 17th over and played it for a single. In that over bowled by Imran Tahir, Punjab got a few singles and played sensibly. Akshar then smashed a six over cover in the 18th over.

Earlier, Kings XI Punjab won the toss and chose to bowl first. There was a big change in their line-up as Mitchell Johnson was benched and Beuran Hendricks came in. Delhi then scored 164 in their 20 overs, although they looked good for a lot more. IPL 2014: Mumbai Indians not yet out of playoffs race, says Michael Hussey 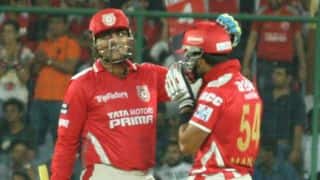