Kiran More: There's no one to help wicketkeepers in India

Kiran More: There's no one to help wicketkeepers in India

Wriddhiman Saha took the responsibility of keeping wickets for India since MS Dhoni‘s retirement. However, India is struggling to find a back-up keeper for limited over’s format. The selectors have been going to Parthiv Patel and Dinesh Karthik from time to time when needed.

Chief selector MSK Prasad was latest quoted saying “Let me tell you frankly. The boys (earmarked for grooming) are not up to the levels we expect. We’ll keep giving them chances in the India ‘A’ series.”

The younger options for keeping after Karthik and Patel, include Rishabh Pant, Ishan Kishan and Sanju Samson. Dhoni has not only set up high standards with his keeping skills but also with his batting in the death overs.

Kiran More believes that India needs to have someone to monitor wicket keeping skills.

“There’s no one to help wicketkeepers in India,” More told to The Times of India.

More is one of the selectors who is also assigned the job of conducting 10-day camp, once a year at the National Cricket Academy (NCA) over the last two years

“That’s not enough. You ought to have people assigned to monitor their growth in domestic games. Video footage is available but no one to monitor and help these boys,” More said.

WV Raman and Narendra Hirwani, handle the batting and spin department at the NCA, however there is no one to guide the keepers.

“We even need wicket-keeping coaches who can travel with the team and get the glovemen ready before the first game on an away tour,” More suggested.

Deep Dasgupta believes that IPL has forced keepers to focus on batting as their primary skills. Dasgupta criticised the mindset of players.

“The mindset has to change. You can’t encourage the idea of ‘we are fine till you keep scoring runs’. You need scouts for ‘keepers,” Dasgupta said. “At the moment one comes to know about a wicketkeeper only through the media. Only those who score runs come up as wicketkeeping prospects. People were even talking about KL Rahul keeping wickets for India.”

Vijay Dahiya also shares his thoughts on Pant and Samson saying they are taking alot of time.

Somebody needs to question the process

“Somebody needs to question the process. Why somebody like a Pant or Samson is taking time?” Dahiya questions.

“Once you are branded as an OK wicketkeeper and a good batsman for T20s and ODIs, it becomes difficult to come out of it.”

Dahiya thinks the selectors could have sent a young keeper to South Africa after Saha’s injury but also supports Karthik’s selection.

“The selectors could have sent someone young as an understudy in the first place. But I do feel they were not wrong in naming Karthik because you need experience at this point of the series,” he said. 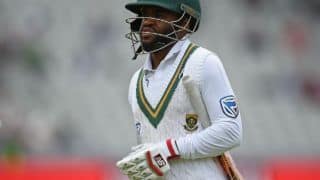