Dwayne Smith was out after getting off to a brisk start for Chennai Super Kings (CSK) against Kolkata Knight Riders (KKR) in the first Champions League T20 (CLT20) 2014 match of the main round.

Pat Cummins bowled at good pace, but both batsmen continued on their way for CSK, flaying anything remotely short or wide for boundaries. McCullum especially was looking in sizzling touch. With the first three overs costing KKR 27 runs, Gautam Gambhir called upon Piyush Chawla.

Earlier, Smith and McCullum opened the innings for CSK as usual, while Pat Cummins started proceedings for KKR. He induced an outside edge from Smith only to see it snaffled by Yusuf Pathan at slip. CSK hadn’t scored a run at that point. Brendon McCullum then proceeded to hit the final ball of the over for a boundary through covers. Umesh Yadav was clubbed away for four over midwicket by Smith off his very first delivery. It was a short ball on off-stump, and Smith made the most of the gift after being dropped.

KKR vs CSK in CLT20 2014: Brendon McCullum, Dwayne Smith off to good start 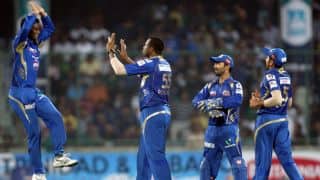