Eoin Morgan and Yusuf Pathan took Kolkata Knight Riders home without any further damage as the home team began the defence of their title in style. 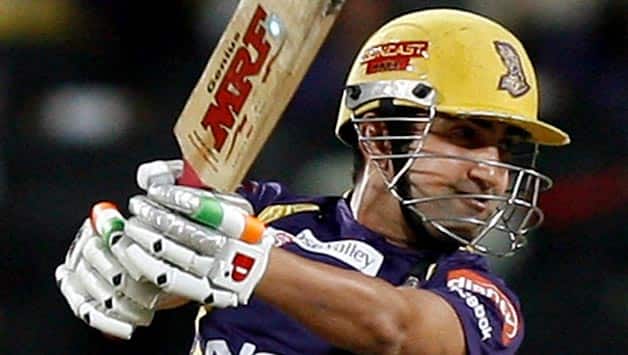 Eoin Morgan and Yusuf Pathan took Kolkata Knight Riders home without any further damage as the home team began the defence of their title in style. In the end, it was an easy chase; KKR won the match by six wickets with eight balls to spare.

Delhi Daredevils will be disappointed with their performance. They were missing big players like Virender Sehwag and Kevin Pietersen, but even they would have been surprised with the way their batting crumbled. Mahela Jayawardene needed some support out in the middle and he did not get any. Some work to do for DD before their next match against Rajasthan Royals on 6 April.

David Warner, who has for some reason been banished to the deep mid-wicket boundary is having a nice chat with the ball-boys. Wonder what they are talking about? Meanwhile, KKR need another 15 from 18 balls and should make it easily.

Manoj Tiwary went to play a cute paddle sweep off Shahbaz Nadeem, but found the leading edge that looped up. ‘Keeper Naman Ojha skipped over and took an easy catch. Totally needless shot at this stage! KKR have lost Gautam Gambhir and Tiwary in quick succession. Can we see a turnaround here? 29 required off 30.

Johan Botha came in and removed the well set Kolkata captain, Gautam Gambhir (42) leg-before. The left-hander went on the backfoot to a full-length delivery which he should have played on his front. Too little too late for Delhi?

Manoj Tiwary played his first agressive shot of the innings as he stepped out and made room against Andre Russell and smacked him to the deep point boundary. Meanwhile, Gautam Gambhir almost ran himself out for the second time in the match after attempting a needless run. KKR need another 36 runs in 42 balls, and a run-out would be comical at this stage.

Delhi Daredevils have stemmed the run-flow a tad, but the Knight Riders still look good to cross the line with ease the way they are going. Gautam Gambhir is looking solid in the middle and Manoj Tiwary is his usual calm and reliable self. At the halfway point, KKR need 54 runs from 60 balls.

Shahbaz Nadeem got the wicket of Jacques Kallis (23) to break a 47-run stand between the South African and Gautam Gambhir. Nadeem’s ball was short and outside off, begging to be whacked. But Kallis’s pull went straight to deep midwicket where Unmukt Chand took his second catch of the night. Still KKR’s game to lose here.

Jacques Kallis and Gautam Gambhir have played some sweet strokes for four to ease KKR’s nerves after Manvinder Bisla’s fall. While Gambhir’s shots have looked aggressive, Kallis has merely punched the ball away to the fence.

Kolkata Knight Riders lost the wicket of Manvinder Bisla (4) in the second over of the innings to the bowling of Ashish Nehra. The left-armer’s short-pitched delivery rose enough to surprise Bisla, whose leading edge looped up as Unmukt Chand came running in from point to take the catch.

Kolkata Knight Riders will chase 129 for victory after the Delhi Daredevils were bowled out for 128 on the last ball of the innings with S Nadeem running himself out. Earlier, Ashish Nehra holed out to deep mid-wicket to make it 128 for nine to give Sunil Narine his fourth wicket. The West Indian ended up with figures of 13 for four. KKR will be extremely happy with their efforts and this shoulf be an easy chase for them.

Mahela Jayawardene (66) provided Delhi Daredevils a late surge, swatting Brett Lee for a flurry of boundaries. However, the Australian had the last laugh. In the penultimate over of the innings, after Jayawardene took the score close to the 130-mark, the Sri Lankan made room for himself and tried to chip Lee over cover. However, he only managed to find Sunil Narine at cover to end a splendid, responsible captain’s innings.

Sunil Narine has struck again to heap more misery on the Delhi Daredevils. Irfan Pathan gave himself room to swot the West Indian’s off-breaker over cover but only managed to send it straight down long-off’s throat.

Mahela Jayawardene is leading a lone battle here at the Eden Gardens. None of his teammates have been able to stick around with him in the middle for long. Naman Ojha (9) was the latest batsman to ditch his captain after skying Rajat Bhatia’s slower delivery straight to Brett Lee at long off. The wicket came as a result of desperation after Delhi’s failure to score runs. The Daredevils are going at a rate of just over seven.

Johan Botha then went for a suicidal reverse sweep off Rajat Bhatia and lost his wicket for playing a poor shot. The ball struck Botha on the thigh outside off-stump. Very marginal chance of it hitting the stump, but the umpire was sure it would have and gave it out. Jayawardene must be a lonely man at the Eden.

Delhi Daredevils have lost their third wicket, that of Manpreet Juneja (8) on the cusp of the Strategic Timeout. Juneja went to slash hard at Lakshmipathy Balaji’s widish delivery, skied the ball towards deep point where Laxmi Ratan Shukla took a superb diving catch. KKR will be pleased with their efforts so far. They have taken wickets at regular intervals.

Delhi Daredevils lost their second wicket on the second-last ball of the mandatory fielding restrictions. Mystery spinner Sunil Narine, who spearheaded KKR’s bowling last season, is back with a bang! Narine’s off-break was poked at by David Warner (21) and Jacques Kallis took an easy catch at first slip. KKR have done well to restrict DD to 45/2 in the first six. Warner and Jayawardene had done well to steady Delhi’s ship after Chand’s early fall and the former would be disappointed with his fall.

Mahela Jayawardene and David Warner are doing well to ease Delhi’s nerves after the early wicket. They are both striking the ball cleanly and making good use of the fielding restrictions in the first six overs. Does anyone else think Unmukt Chand shouldn’t be opening the batting? Jayawardene seems like a stable option in Virender Sehwag’s absence. The Nawab of Najafgarh should be back though sooner than later.

Brett Lee has cleaned Unmukt Chand first ball! What a start here for the Kolkata Knight Riders! The ball pitched on middle-off and cut away enough to send Chand’s off-stump cartwheeling towards the keeper. Mahela Jayawardene, at No 3, under pressure, whipped Lee to the mid-wicket boundary next ball. David Warner got to swing his arms as well, thrashing Lee to the cover fence on the last ball of the over. Two boundaries and a wicket! It’s all happening!

Kolkata Knight Riders captain Gautam Gambhir won the toss and has elected to field first in the first match of the Pepsi IPL 2013 against Delhi Daredevils.

“The weather is pleasent and the track looks good,” said Gambhir after winning the toss. “We are going to bowl. We do not know what a good total will be on this track. It is a different track to last year. Some of the guys have been playing international cricket and I hope that they carry the form ahead. There is hardly any dew. The four foreign players are Brett Lee, [Jacques] Kallis, [Eoin] Morgan and [Sunil] Narine.”

Daredevils captain Mahela Jayawardene said he would have batted first anyway. “I was going to bat first since it is the first game and we want to put the runs on the board. I have been here for two weeks and we have gelled together. [David] Warner, myself, [Johan] Botha and Andre Russell are the four overseas players”