Despite Rajasthan Royals putting in an inspired spell of bowling – courtesy their two bowling changes in Varun Aaron and debutant Oshane Thomas – Kolkata Knight Riders were buoyed by a 50-ball unbeaten 97-run knock from skipper Dinesh Karthik who led the hosts to 175/6 at the Eden Gardens, Kolkata in Match 43 of IPL 2019

Karthik rebuild the innings coming in at 31/2 and finished with a big flurry taking just 15 balls to race from 50 to 97 with the help of seven fours and nine sixes. He took 16 runs off Jofra Archer‘s final over – the 19th of the innings – and then added 18 runs of the 20th, bowled by Jaydev Unadkat.

Andre Russell, who found himself out in the middle by the 12th over, was hampered by a shoulder niggle and despite being dropped twice failed to make the most of the opportunities falling for 14 off 14 balls, off an Thomas wide bouncer caught at deep mid by young Riyan Parag. Earlier, Stuart Binny had dropped Russell on 3 at deep point off Archer and then Prashant Chopra grassed a skier off Thomas to give Russell his second reprieve. Carlos Brathwaite, getting a game in place of Harry Gurney, also failed to get going and scored just five off three balls. (IPL 2019, KKR vs RR: FOLLOW LATEST UPDATES)

Karthik and Rinku Singh then added 44 runs for the seventh wicket to push KKR to 175/6. Karthik notched up his 19th IPL fifty.

For Rajasthan, Aaron finished with 2/20 his his four while Thomas returned 1/32 in his four. Shreyas Gopal and Jaydev Unadkat added one wicket each.

After Earlier. after Aaron dented KKRi early Karthik came to the fore for the hosts, helping his team to 96/4 by the 14th over – when the second strategic time-out. DK walked in to bat with KKR in a precarious 31/2 in 4.6 overs and with Nitish Rana tried to rebuild the innings.

Rana hit some lusty blows to get going, but was bogged down in the middle overs, before falling to Gopal in the ninth over caught at point by Aaron for 21 off 26 balls. Karthik then upped the ante with a massive over that saw Gopal being hit for three fours and a six. Sunil Narine, dropped down to the middle order, added a six off the last ball as the over went for 25 runs.

But KKR lost Narine to a run-out, affected by Aaron, for 11 off eight balls, in the 12th over, but Karthik found the boundaries regularly hitting a six and four off Aaron to score 41 off 30 balls. At the other end, Andre Russell is batting on two off three balls.

The Jharkhand pacer, who replaced Dhawal Kulkarni in the playing XI for RR, dismissed both the KKR openers Chris Lynn and Shubman Gill and justified his selection in the side.

Nitish Rana joined Gill after Lynn s fall. The two Indians added 31 runs together. However, just when KKR were hoping that the two will score big, Aaron once again dashed those hopes as he sent Gill packing for 14.

Gill scored 14 off 14 before Aaron disturbed the timber in the fifth over to scalp his second wicket in the powerplay and pushed the DK-led KKR on the backfoot in the six overs.

RR made two changes to their playing XI as Aaron and the West Indian pacer Oshane Thoman were picked in the team for the first time this season. Kulkarni and Ashton Turner, who had a hat-trick of golden ducks were dropped to include the pace-bowling duo. 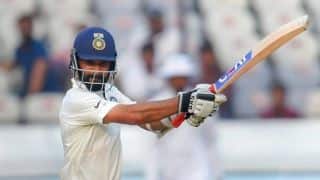 IPL 2019: Trying to get MS Dhoni have rest is difficult, he is keen to play all the CSK games: Michael Hussey