KL Rahul became overall 13th Indian batsmen and 2nd Indian opener to achieve the feat of scoring a half-century on an ODI debut.

KL Rahul scored a staggering half-century in his maiden ODI match against Zimbabwe at Harare. He became overall the 13th Indian batsmen and 2nd Indian opener to achieve this spectacular feat. As the ball was seaming around, KL Rahul played with caution and put a price on his wicket. He took his time to get accustomed with the conditions and played strokes as soon as he found his feet. His innings was studded with five swashbuckling boundaries. He has been playing Test cricket for the last 18 months and already has two centuries his name; to add to the fire, both came on foreign soil. Live Cricket Scorecard: Zimbabwe vs India, IPL 2016, 1st ODI match, at Harare

Rahul was drafted into the 15-man squad on the back of his commanding performance in the recently concluded Indian Premier League (IPL) 9. In 14 matches, he plundered 397 runs at a stunning average of 44.11 and even more swaggering strike-rate of 146.49. For a batsman who is technically immaculate, these numbers are indeed applaudable. Moreover, his wicketkeeping skills made everyone sit up and take notice. Thus, it would be interesting to see if Virat Kohli chooses him over Wriddhiman Saha in the longest format.

This season, India is scheduled to play 17 Test matches: four against West Indies, three against New Zealand, four against Australia, five against England and one against Bangladesh. Read: Ambati Rayudu completes 1,000 runs in ODI cricket

Rahul has been playing a role of a backup batsman in Tests. Every time a top-order batsman is ruled out due to an injury, Rahul makes it to the playing XI. At a young age of 24, this class-apart batsman has impressed the cricketing fraternity with his superior batsmanship in both Tests and T20s.

Undoubtedly, if given more opportunities, Rahul will make headlines in ODI format as well. 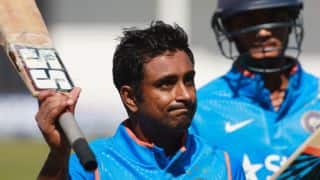