It is a must win match for both RCB and DD as the winner will progress to the playoffs.

KL Rahul was looking in excellent form until Carlos Brathwaite came into bowl and got the wicket off his very first delivery of his spell during match 56 of the Indian Premier League (IPL) 2016 match between Delhi Daredevils (DD) and Royal Challengers Bangalore (RCB) at Raipur. Rahul was dismissed for a well made 23-ball 38. It was a rather unfortunate dismissal. Rahul was looking to to run the ball down to third man, but the ball bounced in front of the wicket and crashed into it. He was looking set to get a big score, but the RCB middle-order is more than capable of taking their side home from here. Live Cricket Scorecard, Delhi Daredevils vs Royal Challengers Bangalore, IPL 2016, Match 56

Virat Kohli and Rahul had put on 66 runs for the third wicket and were threatening to take the game away from DD. With Rahul’s wicket, they can now plot a way back into the game. The required run rate is just around a run a ball now and RCB are firm favourites to win this match even from here. Shane Watson has walked in at No. 4.  Live Cricket Scorecard, Delhi Daredevils vs Royal Challengers Bangalore, IPL 2016, Match 56

DD had posted 138 for 8 in their first innings, with Quinton de kock scoring a good 60. DD had made a couple of changes to their side with Sam Billings and Chris Morris coming in place of JP Duminy and Nathan Coulter-Nile respectively. This is a must win game for both sides, as only a win will take them to the playoff stages of the tournament. If RCB win they will  move to the second position in the IPL table due to a higher net run rate. 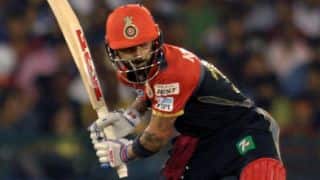