Rahul lit up the skies in the recently concluded T20I series against Sri Lanka.

Ahead of his first South Africa tour, KL Rahul has opened about his approach and preparation going ahead. Rahul lit up the skies in the recently concluded T20I series against Sri Lanka, has said that he is keenly working on, converting his fifties into hundreds.

Speaking to IndianExpress Rahul said: On Indian wickets, especially since we re going from having played the shorter formats, pitches don t do much, so you can stand and play a lot of shots. Once you go there, there will be a lot of seam movement. You will have to leave a lot of balls, especially against the new ball, and be selective in your strokes. You have to give yourself some time to get set.

He also talked about batting with Murali Vijay and KL Rahul. He said: There is a calmness in how Vijay goes about his innings. The way he takes his time and the way he leaves balls around off-stump. He controls that phase of the game and gives a lot of confidence, as a result, to the man at the other end. Shikhar is more attacking. The right-left combination also makes the bowler constantly readjust his line and length. It gives an opportunity to get more bad balls.

Rahul explained, He hasn t said this to me in as many words, but he s somebody who has helped me a lot. He has helped me mentally and given me confidence as a coach and is like a mentor to all of us. He is constantly asking us to be fearless and back our game. He is someone with whom I can talk about anything.” 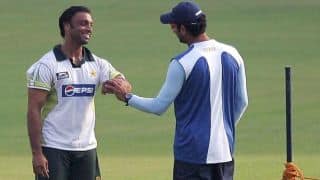