KL Rahul feels that had there been another six overs possible, India would have had a good chance to take the opening lead in the series.

India fell short of a win narrowly against Sri Lanka in the opening Test at the Eden Gardens on Monday. They had to settle for a thrilling draw. India, who looked in control, were indeed troubling the Lankan batsmen with the ball in the closing stages of the game. However, with overcast conditions in the opening three days, followed by bad light, time ran out for them. Meanwhile, KL Rahul feels that had there been another six overs of play, India would have had a good chance to take the opening lead in the three-Test series. FULL CRICKET SCORECARD: India vs Sri Lanka 2017-18, 1st Test at Eden Gardens

On India missing out on a win

These are the kind of matches you look forward to. We could have made a match out of it if we had five or six overs more. It’s a good experience for all of us. I don’t think I played a game like this personally shortened and rain- curtailed but goes down to the wire. It was very exciting. It was absolutely an exciting game. On a wicket like this, it would have been great if we had have five days of cricket, said Rahul during the post-match press conference.

This wicket had something for pacers on all days. It would have been a completely different situation if they batted first but that’s how it goes. We enjoyed the challenge batting first and it was a good experience for all of us. Lakmal bowled rally well and there was help for pacers. Our bowlers produced some beauties in the first innings. We beat the bat a lot but they were lucky as none of the edges carried or went to hand. I didn’t think first Test would be so close after two rain-interrupted days. FULL CRICKET UPDATES: India vs Sri Lanka 2017-18, 1st Test at Eden Gardens, Day 5

We played really well to come back from how we started… We were 17/3 and to come out of it and make a game was commendable, it speaks volumes of the team and how we evolved. Bowlers did the job batsmen played really well. It would have been nice to win but we have two more Tests we would look forward to that.

That’s how the game is played. Nobody wants to lose game. These are tricks of the trade and are used by every team. Nothing unfair about it. As a team, you try to win you try to push in as many overs you can but that’s how it’s played. You can’t really complain. Like I said we could have made a match if we got about five-six more overs. It was exciting for us.

On missing out on a century

It’s obviously disappointing but I’m not worried. I never played for numbers. Looking back, I would have wanted to convert at least half of them into 100s and my stats would have been a lot different showing eight-nine hundreds. It is disappointing as team looks forward to me go for bigger runs. I can get runs much faster if I stay there in the middle to give bowlers more time and cushion. I am sure it will come and I’m not really worried. 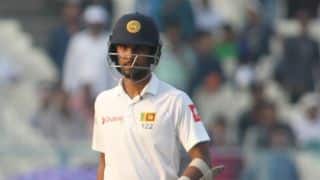 Dinesh Chandimal: Sri Lanka fought well and played as a team against India in 1st Test Virat Kohli too early to be compared to Sachin Tendulkar, feels Sourav Ganguly