Bangar said Rahul was no longer an inexperienced player and he ought to shoulder more responsibility.

Sydney: KL Rahul is a strong contender for the opening slots for India’s first Test against Australia next week but his knack of “finding new ways to get himself out” has not gone down well with assistant coach Sanjay Bangar.

Rahul was the only prominent batsman to miss out on a significant score in India’s 358 all out on day two of the four-day tour game here. He was out for three runs while playing a loose drive on the up and was caught at mid-off within the first hour of play.

As many as five different Indian batsmen, including Virat Kohli and Prithvi Shaw, scored half-centuries in what Bangar termed as a satisfactory outing.

Bangar said Rahul was no longer an inexperienced player and he ought to shoulder more responsibility. “He (Rahul) has been looking in good shape, including today. It is just that he is finding new ways to get out. Even today, the ball was quite afar when he played it away from his body and lost his wicket. But what we are reading he is playing the ball well and he is one hit away (from form),” Bangar said after the day’s play on Thursday.

“We know his ability and if he converts that to performances then it is important for the team. He is not a young player anymore, and he is on his second tour here. He has played 30 Tests and he has a responsibility. We expect him to play with that responsibility and play his role for the team,” the coach said.

Bangar made it clear that the opening combination as well as the number six slot for the first Test in Adelaide beginning December 6 are still up for grabs.

He said the second innings will help decide about the composition of the batting line-up, with Rahul, Murali Vijay, Rohit Sharma and Hanuma Vihari in focus for the opening and number six spots.

“I would say there are still some spots to be taken. We will keep a close eye on how the second innings goes and it gives some other batsmen a hit especially Murali Vijay and middle order batsmen, and see how they go.

“There are certain spots to be taken still. We are looking at the opening slot as well as the number six slot. Those are the positions we are still looking at, we have not decided yet,” he added.

Bangar said the second day’s display was satisfying, with most of the batsmen getting good knocks, though they were facing inexperienced Australian bowlers.

ALSO READ: Australians should play tough cricket, whether they like it or not: Michael Clarke

“It was a pretty useful time in the middle. It was important that we switch to this format of the game because some of the guys are coming from T20s. Some Test guys, except for Cheteshwar Pujara, had a first-class game in New Zealand as well. All of them got to spend some time in the middle and get some runs,” he said.

“Some went to New Zealand (as part of India A) with intention of getting accustomed to the bounce in their first game in Australia. It is different conditions in Adelaide because this is not a fast paced pitch as you would expect there (New Zealand) or in Perth. But we are out here to make most of whatever we get.

“From that perspective, Virat switching formats from T20 to four-day game, Pujara coming straight back in the groove, Ajinkya spending a lot of time. Hanuma Vihari played with a lot of confidence and clarity. Rohit came back and got a knock, spending some time in the middle. All in all pretty satisfying effort from our side,” said Bangar.

Asked about the quality of Cricket Australia XI’s pace attack, Bangar said that the visitors did not have any complaints.

ALSO READ: Australia have got a top-class bowling attack, should not be underestimated: Ian Chappell

“We understand that there are Shield games going on. We are pretty happy with what they put up against us. They put in a lot of effort right throughout the day and that’s what we are looking at.”

Shaw set the tone early on and hit a carefree half-century. Bangar was all praise for the youngster who has pretty much nailed his spot in the playing eleven for the first Test.

“He has made a mark straightaway in whichever format he has played limited overs or first-class cricket, Irani Trophy, Ranji Trophy, Duleep Trophy or India A. He has shown he can adapt to the conditions and to the stage as well.

“He plays with a lot of clarity and the impressive thing about him is that he gets into good positions with clarity of mind and fearlessness of youth that helps him quite a bit,” said Bangar. 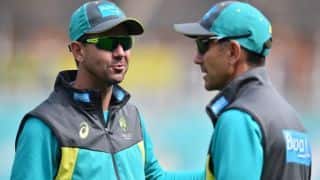