Going into lunch, Rahul was batting on 89 while Pujara remained unbeaten 11 as India trailed England by 304 runs.

With a chance to exploit cloudy conditions in Chennai, England skipper Alastair Cook opened the bowling on Day Three with spinner Liam Dawson and Stuart Broad. Indian openers, who got off to a steady start late on Day Two, batted with much control and built a near-perfect launch pad for the middle order to lambast their opponents, adding 152 for the first wicket. KL Rahul held the fort from one end, with Cheteshwar Pujara getting off a confident start after Parthiv Patel perished for 71. The session belonged to India, who reached a formidable 173 for 1, trailing England by 304 runs.

Dawson, playing his first Test, was on the money in his very first over, giving away just 2 runs. Indian batting pair of Parthiv and Rahul continued their fight to guide their team nearer to England s total of 477 at MA Chidambaram Stadium. Broad came in to partner Dawson, and was treated with a crackling boundary straight down the ground by Parthiv in his first over. Not the one to clamp down, Rahul struck Dawson for a massive six, straight over the young left armer s head in reply to Parthiv s belligerence.

Rahul did not stop with one, crashing Dawson right into the stands in his next over. The ball, taken on the full, was dispatched by the batsman into the restricted stands. Rahul s intent was clear, you miss I hit. Rahul, notched up his second Test fifty in 96 balls, which included 3 fours and 2 sixes.

Parthiv and Rahul brought up their 100-run partnership in 175 balls. Cook opted for Moeen Ali and Jake Ball in a bid to get a wicket. Moeen almost did the trick thanks to his lack of pace which saw Parthiv collect two runs in the slip cordon.

Rahul, post his half-century, went on a blitzkrieg, accumulating boundaries across the field. Rahul did show signs of discomfort in his right knee but continued to march on for his team s side.

After keeping wickets for a day and 3/4th, India s little man Parthiv came out to open the innings and proved his worth in runs. Parthiv looked unfazed by the bowling attack apart from a few glitches in between, en-route his second fifty of the series and sixth overall.

What was interesting to see was Cook s strategy of not bringing on his best bowler on the tour Adil Rashid to bowl. For a bowler who has 22 wickets in the series Rashid is surely does not enjoy his skipper s confidence. It was only in the 37th over that Rashid was brought on into the attack.

Rahul s range of shots was on full display as he reversed swept Moeen for a boundary, a facet which was missing last evening where he opted for a more calmer and quitter approach.

The pair also brought up their 150-run stand with Parthiv clobbering Moeen for a four over midwicket.

Moeen and Rashid bowled in tandem only to leak runs without any success for 7 long overs, before the former nipped Parthiv s wicket. Parthiv, trying to go over the top, managed a leading edge to a ball that thankfully for Moeen and England had spun the other way.

The pair added 152 for the first wicket as Parthiv s stay in the middle came to an end (71 off 112). This prompted India to sent in their regular No.3 in Pujara, which proved that there would be no batting change for the others with Vijay not opening the innings. Vijay has injured his shoulder, but he is fit to bat at any position..

Dawson was brought back into the attack; but this time the bowler embraced a negative line (over the wicket).

Going into lunch, Rahul was batting on 89 while Pujara remained unbeaten 11 as India trailed England by 304 runs. This session yielded 113 runs in 28 overs with the loss of only one wicket falling in the process for India. 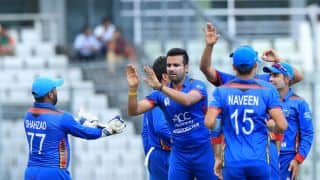