This is the first time India posted a total more than 200 in consecutive T20I matches.

India once again dominated the Irish bowling attack by posting 213 for 4 after being asked to bat in the second T20 International against Ireland at Malahide. This was the first time India posted a total more than 200 in consecutive T20I matches. KL Rahul (70), who did not get a chance in the first match, anchored the Indian innings along with Suresh Raina (69). They helped India reach three figures within 10 overs.

India made four changes in the side giving chance to Rahul, Dinesh Karthik, Umesh Yadav and debutant Siddarth Kaul. Virat Kohli opened the batting with Rahul but failed to make it count getting out on 9 in the third over. Kohli top-edged a pull off Peter Chase, and George Dockrell took a very well-judged skier at deep square-leg.

Raina, who came in next, timed the ball perfectly and placed them in the gaps. He welcomed Stuart Thompson with a glorious inside-out six in the fifth over that went for 17. He and Rahul added 106 for the third wicket.

Kevin O’Brien finally came to bowl the 13th over and dismissed Rahul on his very first ball. He bowled a good-length delivery that held its line, and Rahul hit it back to him. Rahul hit 3 fours and 6 sixes in his 36-ball 70. Two balls later O’Brien sent Rohit Sharma back to the pavilion. Rohit leaned forward to drive outside off, giving a simple catch to backward point.

The Irish bowled 12 wides (2 extra overs) in 20 overs. O’Brien had 3 for 19 after 3 overs, but his fourth over went for 21 including 3 massive sixes from Hardik. He also joined George Dockrell in the list of most T20I wickets (58) for Ireland. Chase, who conceded only 11 off his first 2 overs gave away 31 in his next 2. Thomas Dale: A cricketer arrested for playing under an alias 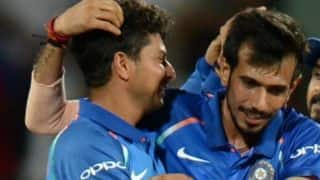