KL Rahul: There is no pressure me losing my position

KL Rahul: There is no pressure me losing my position

Indian opener KL Rahul on Thursday said that skipper Virat Kohli's backing has acted as a massive confidence booster for him.

India beat Sri Lanka by an innings and 53 runs
Man of the Match: Ravindra Jadeja

Indian opener KL Rahul on Thursday said that skipper Virat Kohli‘s backing has acted as a massive confidence booster for him in such a short span of his international career. Rahul, who scored a healthy 57, on Day One of the second of the three-Test series against hosts Sri Lanka, at the Sinhalese Sports Club (SSC) in Colombo on Thursday, was involved in a horrible mix-up with Cheteshwar Pujara, leading to his run out. Later, Rahul said that he is confident that his place in the India side is secure, while the pre-match interaction with the team has massively helped him in recovering quicker from the injury. FULL CRICKET SCORECARD: India vs Sri Lanka 2017 2nd Test at Colombo

“It makes a massive difference. It gives me so much confidence, not just now but even after the surgery the support staff, the coaches, the boys were constantly messaging me and saying whenever you are ready, get ready sooner, the team misses you and small things like that make a lot of difference. That kept me motivated, that woke me up each morning to go to physiotherapy and do my boring rehab. It gives you confidence that team is backing you, team trusts you, waiting for you to come back into the team and that makes a big difference and I come back with lot more confidence,” Rahul said.

“I can walk into the team with ease in my head, there is no pressure me losing my position which is great and which the captain and coaches have always given me that support which has played a big role in my small career so far. We as sportsmen, we’re not used to just sitting at home and being at home all day. We want to go out, we want to play sport, we want to be in the gym, want to train, we want to hit balls, and when you’re not physically able to do that, it’s really tough. It starts playing on the mind a lot more,” he added. FULL CRICKET UPDATES: India vs Sri Lanka 2017 2nd Test at Colombo, Day 1

“I have kind of gotten used to this. More than playing for a long time, I have been in and out of the team because of injuries. It s never easy to come back. It takes you a couple of games to get back into your groove as an opening batsman, understand where your off-stump is, to understand what pace you have to play at, how many shots are too many shots, how slow is too much slow – there are a lot of things, a lot of doubts in your mind if you keep going out and coming back in. But I have enjoyed the challenge,” he continued.

“I wanted to be in the middle, play as many balls as I could, as many days as I could if I could bat. I was disappointed about that. I was looking good and just after lunch, a crucial time as a batsman, you can capitalise and get a lot of runs during that session. So I was disappointed that I got out at that time,” he added.

On being asked if he could have had more centuries and half-centuries, had he previously converted his good starts, he said, “I’ve never chased numbers, firstly. My job as an opening batsman is to give the team a good start, lay a solid foundation and I think I’ve done that so far. Disappointing that I have not been able to convert that, but I think that will keep me hungrier. Each time I go back to bat, I will want to get more and more runs. I am not cautious about numbers right now, but maybe if this keeps going it might start playing on my mind.”

“But nothing changes, you feel a lot more confident, you’re seeing the ball a lot better, so you want to maybe play a little bit more positively. All the answers to the questions I will only find when I’m in the middle and when I get a hundred. That’s when I’ll know what the right process is and how I need to go about my innings, he added.

Speaking on the pitch at SSC, he said, “It’s completely different from the one we played on the last time around. When we saw the wicket a couple of days ago, we did expect the wicket to be the same as last time, but today we turned up and the wicket was different. It was on the slower side and I think it will take turn as the days go. The more the footmarks, the more turn and purchase Ashwin and Jadeja can get.” 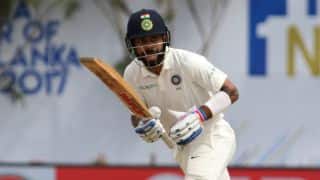