KL Rahul was India's opener in their last ODI series versus England and was in contention for the opening slot along with Rohit Sharma for ICC Champions Trophy 2017.

India‘s prolific opener KL Rahul, who is sitting out from the ongoing Indian Premier League (IPL) 2017 edition, has revealed that he is unlikely to regain fitness ahead of ICC Champions Trophy 2017. Rahul, who hurt himself during the first Test against Australia in Pune, has been battling with a shoulder injury since then and has been a major miss for Royal Challengers Bangalore (RCB) in IPL 10. After the cash-rich league, India will head to England to defend their CT2013 title. Virat Kohli-led side will be eyeing their third trophy in the tournament history which will be played in England and Wales. Twitterati hail KL Rahul on becoming first Indian to score a ton on ODI debut

“I have to wait and see but the chances are slim. I had torn my labrum (a ring of fibrocartilage attached to the shoulder socket). I couldn’t get into a few positions because my shoulder kept dislocating. That’s why I couldn’t play a lot of shots and had to restrict myself (during the Border-Gavaskar Trophy 2016-17). I played with a lot of medication and taping”, Rahul was quoted as saying by Times of India.

Despite this, Rahul finished the series against Australia as India’s second-highest run-getter with 393 runs at 65.50 including 6 fifties in 7 innings. After the series, Rahul went to England to undergo a surgery and said it might take his shoulder “2-3 months” to recover fully.

“The doctor said it will take 2-3 months. Each body is different, so you don’t know how it recovers. It is totally up to me and how I well I take care of myself in the rehab phase. For now, it is 2-3 weeks of relaxing and after that, I will start physiotherapy. My rehab will start from there”, Rahul told.

The injury occurred when Rahul hammered Steven O’Keefe for a six on Day Two of the series opener at Pune. “It is a sports injury but the doctor was surprised it happened because of batting. It mostly happens in contact sports where people run into you. The physio (Patrick Farhart) was surprised because there was no such major incident. It was that moment in Pune when I played a shot – not the one I got out to, but the one that went for six. That’s when I knew that my shoulder dislocated and went back in. I got out playing the same shot, so by then it was completely damaged. I couldn’t do anything after that”, he added.

“It is frustrating for a young man who is new to international cricket – it’s been two-and-a-half years now. I’ve already been injured twice or thrice. It makes me think about what I am doing wrong. I can’t see any reason why I keep getting injured because I am disciplined with my fitness and my diet and I look after my body. Now is the time to see what I can change in training. To be injury-free is wishful thinking for a sportsman. To be fit and minimize injuries will be my goal once I get back”, concluded Rahul. 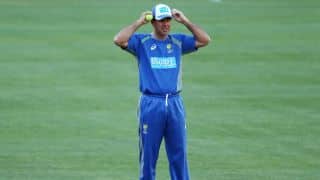