Kochi Tuskers managed to restrict the Delhi Daredevils to 140 for six in their 20 overs in their IPL game at the Feroz Shah Kotla. With both teams struggling at the rear end of the points table with three wins from eight games, the side losing this game could face extinction from the tournament. 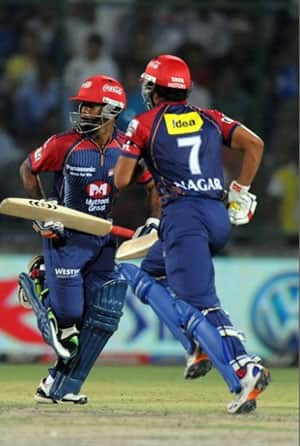 Kochi Tuskers managed to restrict the Delhi Daredevils to 140 for six in their 20 overs in their IPL game at the Feroz Shah Kotla. With both teams struggling at the rear end of the points table with three wins from eight games, the side losing this game could face extinction from the tournament.

Delhi had gone into the game unchanged from the match against the Kochi Tuskers which they had gone on to win. Kochi made a couple of changes, but there was no sign of Muthiah Muralitharan. They got in a Kerala rookie Prasanth Parameswaram and Raiphi Gomez into the side. B Akhil and Ramesh Powar had to sit out for this one.

Virender Sehwag s sizzling 85 in the previous game was the difference between the two sides. And by a long distance. This time, Sehwag welcomed RP Singh with a couple of boundaries in the first over and Parameswaran with a six off his first delivery in IPL cricket to raise hopes of a similar knock.

Unfortunately for the Daredevils, off the very third ball from Parameswaran, Sehwag was beaten by the bounce and edged it to the wicket-keeper, Parthiv Patel. The umpires had to only wait for a bit to check on the no-ball but once it was deemed to be a legal delivery, Sehwag was sent back.

Naman Ojha took over from Sehwag and in Parameswaran s second over and the fifth of the innings slammed him for a six and a four to take Delhi to 38 for one.

Unfortunately for the Daredevils, this was immediately followed by a couple of wickets. Warner, frustrated by the lack of runs tried to pull Sreesanth but only managed to push it as far as mid-on for a simple catch. And then Ojha s attempt to drive the ball only managed to catch the edge en route the wicket-keeper.

With two of the more aggressive Daredevils batsmen back into the hut, the pair of Veugopal Rao and Yogesh Nagar tried their hand at consolidation. The runs came in a trickle, as would be expected, in the first few overs, with the 50 coming at the end of the eighth and by the time it was the half-way stage, the Daredevils had only 62 on the board.

There was some acceleration towards the overs after the 10th. A slower ball from Vinay Kumar that bounced twice was spanked to the fence by Nagar while Rao drove Gomez to the long-off fence.

RP Singh s reintroduction saw an edge going to the boundary before Vinay Kumar had Nagar top-edging a bouncer to the fine-leg.

Rao and new-comer Travis Birt, both had a boundary to their name in the next couple of overs but where the Daredevils were really struggling was their inability to get a really big over.

Parameswaran returned in the 18th over to get Rao out, again pulling a short ball straight to a fielder. It was, however, this over that the Daredevils finally got a bit of a move on, with a couple of hits to the fence from the bat of Birt.

Another couple of strokes followed to the fence before Vinay Kumar had Birt edging to the wicket-keeper and with only five coming in the last over, the Daredevils managed only 140.