A strong start gave way to a muddle middle period as Daniel Vettori stemmed the flow of runs tremendously, and having kept Kochi Tuskers Kerala to 161 for five, Royal Challengers Bangalore will feel somewhat pleased. 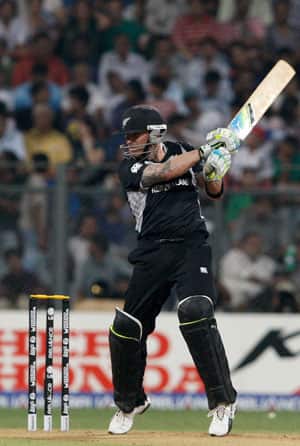 A strong start gave way to a muddle middle period as Daniel Vettori stemmed the flow of runs tremendously, and having kept Kochi Tuskers Kerala to 161 for five, Royal Challengers Bangalore will feel somewhat pleased. Such was the ferocity of the home team s start that it seemed 175 was on the cards, but Vettori led from the front brilliantly and Zaheer Khan finished the innings without letting KTK tee off. Both captains, at the toss, reckoned 160 was a par score and that is what KTK have got.

Batting first, on a deliciously flat pitch, the KTK openers romped along. Brendon McCullum got proceedings going with a powerful slap off Zaheer in the first over before training his sights on Dirk Nannes, who was sent off to the outfield after conceding 16 from his first over. Nannes length proved to McCullum s liking and the first three deliveries were driven, slashed and pulled for 14 runs. Zaheer wasn t as easy to get away as he varied his length and speed cleverly, but Abhimanyu Mithun let his team down by conceding 19 off his first over, including a no-ball which VVS Laxman slogged straight down the ground for maximum.

Laxman – so often a calm, controlled batsman, combined his usual elegance with a flurry of belligerent shots; cutting and steering deftly, pulling powerfully and launching two sixes into a raucous crowd. Against spin, he used his wrists to get elevation over the circle rather wonderfully.

After Laxman s cameo of 36, which came about as he tried to force the pace after being tied down by Vettori, in came the Kochi captain Mahela Jayawardene and the run rate slowed a touch. Looking to be too clever, McCullum attempted a paddle scoop against Virat Kohli and top-edged a low full toss to short third man. With two wickets in relative succession and Vettori operating with a tidy line, Brad Hodge found himself needing to accelerate from the start, and began so by slapping four through midwicket.

Jayawardene s first foray down the track resulted in a stumping off Vettori, who bowled his quota for a miserly 17 runs. With the innings starting to slow down, Hodge opened his shoulders and collected three fours in his 27 before Zaheer castled him. Ravindra Jadeja s 23 gave the end of the innings some flourish but you got the sense KTC had squandered a strong platform.