Kohli was on the cusp of a record breaking double hundred as India continued to torment South Africa, reaching 473 for 4 at tea

Virat Kohli was on the cusp of a record breaking double hundred as India continued to torment South Africa, reaching 473 for 4 at tea on the second day of the second Test match. The India captain, who went into the break at 194 and is now six runs short of scoring more double hundreds than anyone in Indian cricket history. He is expected to surpass legends Sachin Tendulkar and Virender Sehwag, who had six each to their credit.

Talking about records, Kohli with nine scores of above 150 has now eclipsed Sir Don Bradman’s eight 150 plus scores. For the record, Bradman has 12 double hundreds in 52 games. Kohli, who is just a few weeks short of his 31st birthday, also equalled Ricky Ponting’s record of 19 hundreds as Test captain, second behind Graeme Smith’s 25 tons.

The Indian captain blended grace with sheer determination en route his 26th Test hundred during the first session but went in to the offensive as he hit those sublime cover drives with ease. In the two sessions, India scored 200 runs losing only a wicket.

If he hit six boundaries in the first session of the second day, he added dozen more in the second with an aggregate of 28 hits to the fence. Kohli was an epitome of concentration and with the dependable vice-captain Ajinkya Rahane (59) for company, grinded the South African attack during the wicketless first session that looked to provide India the decisive upper hand.

The 178-run fourth wicket stand broke the spirit of the Proteas attack and a partnership of 97 runs with Ravindra Jadeja (25 batting) was like adding insult to injury. In the first session, a beautiful straight drive off Vernon Philander brought up Indian captain’s 69th international hundred and the muted celebration was more about contentment than elation.

Not for once did he look in any sort of hurry to complete the milestone as he respected the good deliveries, slowly trudging his way to the coveted three-figure mark. South Africa will certainly feel dejected as their bowlers put up a good show even though the scoreboard suggested otherwise.

Kagiso Rabada (3/93 in 30 overs) and Philander (0/66 in 26 overs), for the second day in a row, bowled a probing morning spell albeit with little luck. Credit to the skipper and his deputy for the manner in which they negotiated the first hour.

Kohli, in particular, was leaving anything that Rabada bowled on the off-stump channel for the first few overs. The only blemish was fishing at an away swinger from Philander, which a diving wicketkeeper Quinton de Kock failed to latch onto.

The bowler’s back-drive off Rabada came soon after as Kohli started opening up. Anrich Nortje also again tried to bowl short but Kohli played his trademark short-arm pull in-front of the wicket. Kohli entered into the 90’s by deliberately opening the face of his bat and using the pace in Nortje’ delivery to get a boundary in the third man region.

Nortje’s extra pace was also well-utilised by Rahane also as he rode the bounce to play a couple of square cuts. Having survived a DRS appeal off Keshav Maharaj’s innings, Rahane finally completed his 20th half-century with a single off Nortje’s bowling. Female representation in BCCI is a giant leap for the sport: Shantha Rangaswamy 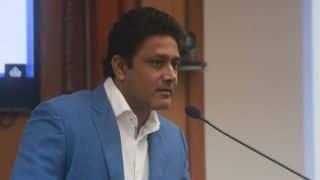