Virat Kohli slammed a fluent century and veteran Rahul Dravid made his final One-Day innings count with a solid 69 as India posted an impressive 304 for six in the fifth and final ODI against England. 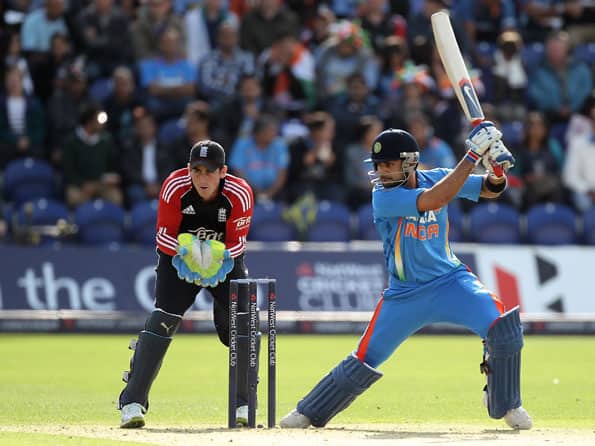 Virat Kohli slammed a fluent century and veteran Rahul Dravid made his final One-Day innings count with a solid 69 as India posted an impressive 304 for six in the fifth and final ODI against England.

Kohli (107) and Dravid led India’s batting charge with a 170-run stand for the third wicket off 160 balls and captain Mahendra Singh Dhoni (50 not out off 26 balls) turned the heat with a blistering unbeaten half century in the final overs to take the visitors’ score past 300 at Sophia Gardens.

This is Kohli’s fifth ODI century from 64 matches while for Dravid it was his 83rd half century in his 344th and final match in the shorter format of the game.

The day began on a familiar note with Indian skipper Dhoni once again calling the coin wrongly and the visitors were once again put in to bat.

The start of the Indian innings was also on familiar lines as was the rain interruption which came bang before the players came on to the field, causing a 40-minute delay.

Parthiv Patel (19) and Ajinkya Rahane (26) once again got Indians off the block quickly with 52 runs being raised for the first wicket from 12-odd overs even though the first four only came in the ninth over.

Rahane, dropped at third man off Steve Finn when on eight, nevertheless played some spanking shots, notably when he square cut and lofted Tim Bresnan for fours.

Rahane left the scene when he aimed to lift Jade Dernbach on the onside but only succeeded in getting a leading edge which was caught at third man by Finn. The right-handed opener made 26 off 47 balls with three fours.

Patel, unable to play big shots, tried to lift Graeme Swann as soon as the off-spinner was pressed into action in 16th over and ended up spooning it at mid-on. He made 19 from 39 balls without any four. The Indians had lost their two openers with 57 runs on the board in the 16th over.

Kohli and Dravid, however, took control of the Indian innings in largely perfect sunny conditions. Dravid began with a backfoot drive through a packed off-side field off Dernbach and later square cut him most sumptuously to signal his intention to make his last ODI count.

Playing a series of off-drives with admirable precision, Kohli reached his half century from 54 balls with four fours as Indians reached 147 for two. The 100-run stand between the two came off only 111 balls.

Dravid reached his half century off 62 balls before being dropped by paceman Dernbach in his follow through when on 51.

The 200 of the Indian innings was up in the 39th over and Kohli celebrated it in style by taking 16 runs off Samit Patel’s eighth over, the 40th of the innings, with two fours and a six straight down the ground.

Kohli soon reached his century by guiding Swann to square leg for a single, the 87th ball he faced in his innings as India reached 227 for two in the 41st over.

Swann, who had gone off the field after jarring his ankle in the deep, returned to make a telling impact by removing both Dravid and Kohli in successive overs.

Dravid went for an expansive drive and had his off-stump pegged back while Kohli trod onto his wicket while playing a backfoot punch. Dravid faced 79 balls for his 69 and hit four fours while Kohli’s 107 came from 93 balls with nine fours and a six.

With new men Suresh Raina and Dhoni at the crease, India opted for batting powerplay in the 45th over at 236 for four.

As many as 48 runs came from five overs of batting powerplay.

Raina announced the onslaught with a straight six off Tim Bresnan. Then Dhoni took over, scoring couple of fours and a six and 17 runs in all off Bresnan’s ninth over.

Raina (15) departed in the 49th over but helped put on 48 runs for the fifth wicket off 30 balls with Dhoni.

Dhoni hit a six in final over bowled by Dernbach and reached his half century off the final ball of innings, facing 26 balls and hitting five fours and two sixes. (PTI)