Riding on a chancy half-century by Virender Sehwag, India kept themselves on course for a come-from-behind victory as they scored 148 for four at tea on the last day of the third and final Test against the West Indies at the Wankhede Stadium. 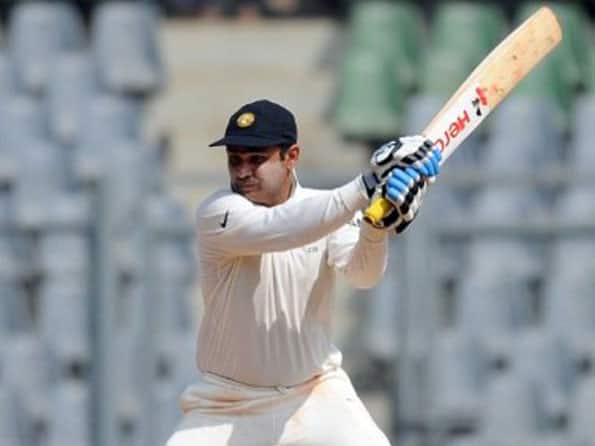 Riding on a chancy half-century by Virender Sehwag, India kept themselves on course for a come-from-behind victory as they scored 148 for four at tea on the last day of the third and final Test against the West Indies at the Wankhede Stadium.

West Indies grabbed four wickets in the post-lunch session to reduce the hosts to 113 for four, chasing 243 in 64 overs, before India progressed to 148 for four at tea with V V S Laxman (19) and Virat Kohli (20) at the crease.

The batsmen sent back in the Indian second essay, all in the post-lunch session, were openers Gautam Gambhir for 12, Virender Sehwag for 60 with eight fours, Sachin Tendulkar for 3 and Rahul Dravid (33 in 49 balls).

India needed 95 runs in 30 overs post-tea to clinch the match for a 3-0 clean sweep of the three-Test rubber, having won the opening two Tests at Delhi and Kolkata.

The visitors had made a massive 590 in their first innings to which India had replied with 482, conceding a lead of 108 runs.

But the West Indies collapsed sensationally for 134 in their second innings against the Indian spin twins — Pragyan Ojha (6 for 47) and Ravichandran Ashwin (4 for 34) — losing eight wickets for 63 runs in 23.2 overs in the morning session.

The Windies bowlers, however, hit back strongly in the middle session to dismiss the top four Indian batsmen in less than 20 overs for 113 runs.

But Laxman, who has faced 32 balls and the more aggressive Kohli, who has faced 19 balls in which he has hit a four and a six, were progressing well towards the target.

The duo had added 35 important runs by tea.

Gambhir was the first to go in the afternoon session when he played a poor shot for the second innings running, driving at Fidel Edwards well away from his body and slicing the ball to gully where West Indies captain Darren Sammy made no mistake.

Sehwag, dropped thrice by the butter-fingered rival team fielders — on six (caught and bowled chance by Ravi Rampaul), 13 (Devendra Bishoo) and 27 (Sammy), played in his inimitable forthright manner to race to his 30th Test half century in 61 balls and 78 minutes with seven fours.

He struck two successive boundaries off leg spinner Bishoo to reach his fifty before he tried to switch-hit the bowler and landed a catch to Sammy at short fine leg, having added 82 runs in 14.4 overs with Dravid.

Sehwag’s departure slowed down the run-rate with Dravid and Tendulkar against a well-spread-out field. Both then departed in identical fashion, playing wristy flicks and getting caught at mid-wicket off off-spinner Marlon Samuels.

Tendulkar, who missed his 100th international ton by a mere six runs in the first innings, fell cheaply in the second knock when his flick was caught brilliantly by a diving Kirk Edwards.

Four overs later Dravid too departed, his flicked shot taken by a leaping substitute fielder Denesh Ramdin well over his head and the run-chase was as good as over at 113 for 4, with the hosts needing 130 more runs from 40 overs on a track offering sharp turn and bounce to the slow bowlers.

In the morning, India’s inexperienced spin twins — Ojha and Ashwin — combined forces in telling fashion to share eight wickets to bundle out the visitors for a meagre 134 and leave India with a golden chance of winning the Test.

Ojha grabbed four wickets for 20 runs in 12 overs to finish with superb figures of six for 47 in 27 overs after having grabbed two West Indian second innings wickets last evening.

Ashwin, who had taken five wickets in the first innings and followed that up with a maiden century to become only the third Indian to perform this all-round feat, today claimed four for 14 in 8.2 overs in the opening period.