Inept batting by middle and lower-order saw India lose seven wickets for only 62 runs in 11.3 overs as they were shot out for 251 in 47.3 overs against the West Indies in the fifth and final ODI at the Sabina Park despite a solid 94 from Virat Kohli. 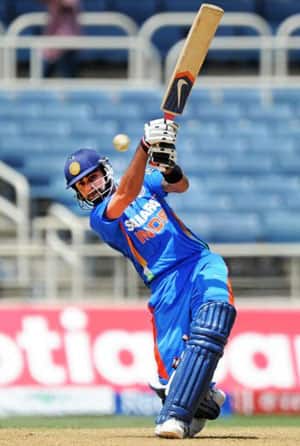 Virat Kohli plays a shot during his innings of 94 AFP

Inept batting by middle and lower-order saw India lose seven wickets for only 62 runs in 11.3 overs as they were shot out for 251 in 47.3 overs against the West Indies in the fifth and final ODI at the Sabina Park despite a solid 94 from Virat Kohli.

Apart from the duo, the rest of the top and middle-order Indian batsmen played poor shots show as Caribbean bowlers led by Andre Russell (four for 35) did well to keep the target within reach.

But another failure from skipper Suresh Raina (0) and Yusuf Pathan’s (30, 29 balls, 2×4, 1×6) failure to make it count after getting set put paid to India’s hopes of posting a huge total.

From 189 for three in 35.5 overs, Indian batsmen blew away a golden opportunity to post a 300 plus total on a wicket where the ball was coming onto the bat.

If Virat was unlucky as he was beaten by fantastic throw from the deep by Ramnaresh Sarwan going for a second run, Rohit was guilty of throwing it away after doing all the hard work.

Skipper Raina would like to forget this series in a hurry as he compiled a poor 74 runs in five matches. Yusuf on his part was looking good to fire all cylinders but failed to handle the extra bounce.

Kohli’s innings was blemish free and it looks like he would walk into the first XI of the Test team after such a quality performance.

The Delhi youngster batted with lot of responsibility as he first steadied the ship with a 58-run third wicket partnership with Manoj Tiwary (22, 22 balls, 1×4, 1×6) and then a century stand with Rohit Sharma.

Skipper Raina will have to take bulk of the blame as India failed to consume 15 deliveries in the end which might mean that they finished atleast 25 runs short of what they were supposed to score.

Put into bat after Darren Sammy won the toss, India lost openers Parthiv Patel (6) and Shikhar Dhawan (11) by the seventh over as both were done in by the extra bounce in the strip.

Parthiv wasn’t in position to pull a Russell bouncer and was holed out at midwicket while Dhawan failed to negotiate a rising delivery and was cramped for room going for a cut shot off Kemar Roach. He was snapped up in the first slip.

The next boundary was rather a streaky edge past slip off Sammy but he made it up with a delightful cover drive in the West Indian skipper’s fourth over.

Manoj for the first time looked comfortable in his short international career. A six off Sammy which hit the wooden roof of the club’s bar was a breathtaking shot. Just when he looked like geting into the groove, he edged one from Kieron Pollard straight to Carlton Baugh.

West Indies steady in pursuit of 252