Virat Kohli hits yet another century as India extend their lead to 199 against Sri Lanka before lunch, second Test at Nagpur.

Virat Kohli hit yet another century as India extend their lead to 199 against Sri Lanka before lunch of the second Test at Nagpur. After Murali Vijay’s departure, Kohli continued the good work with Cheteshwar Pujara and remained unbeaten. India lost only a wicket in the first session on Day Three: Pujara departed for 143. India have put up 404 for 3, with Kohli (123*) and Ajinkya Rahane (0*) at the crease.

Though Pujara played with patience, Kohli increased the scoring rate. This was his 19th Test ton and 12th as captain. Kohli now has hit most hundreds as an Indian captain, followed by Sunil Gavaskar (11) and Mohammad Azharuddin (9). He also has hit 10th centuries in 2017, most by any captain in a calendar year. Earlier, the record remained with Ricky Ponting who had hit nine centuries each in 2005 and 2006 as well as Grame Smith who had hit as many in 2009.

Pujara reached 3,000 runs in the format during the session. He became the fastest Indian to reach the landmark in 51 innings, surpassing Sachin Tendulkar who scored as many runs in 59 innings.

Dasun Shanaka was the only successful bowler of the session. He attempted a yorker, which pitched almost at full length and found the gap between Pujara’s bat and pad to get the batsman bowled for 143. Pujara and Kohli put up a 183-run partnership before the dismissal. India scored 92 runs in the session. 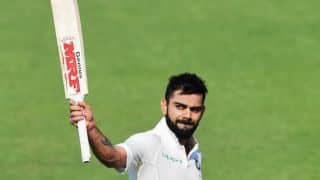 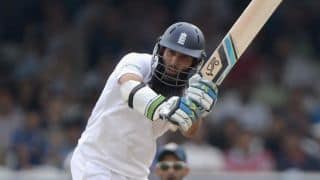