Shahrukh Khan's IPL team Kolkata Knight Riders' cheer girl was on Thursday arrested from a hotel in Pune on alleged involvement in a prostitution racket. Shahrukh Khan‘s IPL team Kolkata Knight Riders‘ cheergirl was on Thursday arrested from a hotel in Pune on alleged involvement in a prostitution racket.

The 22-year old was arrested along with an agent identified as Seema Bhagwan Jagtap after a tip-off by a team of Social Security Cell, led by senior inspector Bhanupratap Barge.

According to a report in Indian Express, Barge and his team successfully raided the spot after the senior inspector tricked Jagtap as a decoy customer.

Both the cheer girl and the agent were arrested under different sections of the Prevention of Immoral Trafficking Act.

The report further added that the cheergirl hails from Nagpur but currently resided in Mumbai.

She had come to Pune along with her mother and friends when she came in contact with Jagtap, when she asked the agent to send a customer at a hotel in Koregaon Park.

Earlier during the fifth season, the owner of the IPL team and Bollywood superstar Shahrukh Khan was embroiled in a controversy after misbehaving with the Mumbai Cricket Association (MCA) officials.

IPL winners Kolkata Knight Riders were knocked out of the ongoing Champions League Twenty20 after their must-win match against Perth Scorchers was called off due to incessant rain in Durban.

The Knight Riders needed to win this match at any cost, having suffered reverses in their first two outings against Delhi Daredevils and Auckland Aces, but luck deserted Gautam Gambhir and his men on their most important day. 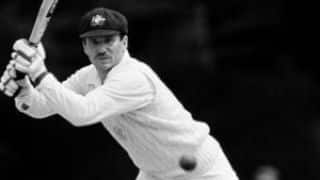 Allan Border hits the one millionth run in Test cricket!