The Dolphins can come out as a tough opponent against KKR if they bat well.

Kolkata Knight Riders (KKR) and Dolphins will play each other in their last league match of the Champions League T20 (CLT20) 2014 at Hyderabad on Monday.  The points table gives the clear verdict. The champions of the Indian Premier League (IPL) 2014, KKR have already booked their slot for the semi-finals, while the Dolphins will play this match and fly back to South Africa.

Dolphins lost all the three matches they played so far. While they managed to get close each time, they simply were not able to get the win. KKR have been unassailable so far, as they have continued their winning streak from the IPL and have won 12 matches on the trot.

When it comes to batting, KKR have looked rusty. The likes of Manish Pandey, Gautam Gambhir and Robin Uthappa would be desperate for runs, while Suryakumar Yadav has looked fluent. His spunky cameo in the last match further added brownie points to his name. While foreign players like Andre Russell and Ryan ten Doeschate have somehow pulled out a rescue act in the end, they have also been handy with the ball.

The Dolphins have showed bright sparks with the ball and have been scintillating in the field too.  Players like Cody Chetty and Keshav Maharaj can also smash the ball with freedom, and can be productive in the slog overs. They are a talented unit, but have failed to project a win so far. They have all the ingredients to win a tournament like this but somehow they have not come out with the results.

The Dolphins can come out as a tough opponent against KKR if they bat well and just push out those nervous overs from Narine. They need to come out with a clear strategy and to win this one. It will be the KKR bowling vs the Dolphins batting in Hyderabad. 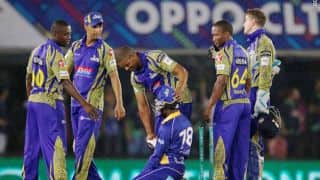 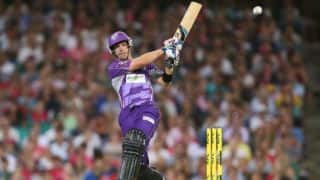