At the iconic Eden Gardens, Kolkata Knight Riders and the Kings XI Punjab battle it out in the first Qualifier of the Indian Premier League (IPL) 2014. The winner of this contest will move into the final instantly, while the loser gets another opportunity by playing the winner of the eliminator. It is fair to say that Punjab have been the best side in the competition. But, Kolkata have been brilliant and have bounced back well. Also, they are one of the two sides who have beaten Punjab this season.

The track at Kolkata has runs in it and seems to be good for batting. Traditionally, it has helped the spinners more but in recent encounters, it has been a run-fest. If Yusuf Pathan’s blitz is anything to go by, the batsmen would back themselves to come good. Glenn Maxwell is the key for Punjab for this contest and they may be a bit worried as he has lost his form a touch in recent times. Plus, teams have found a specific weakness against leg-spinners. That may just push Kolkata to bring in Piyush Chawla for this crucial game.

Punjab brought back their best men for the job in their last league game and fielder both David Miller and Maxwell. Even Mitchell Johnson made it back. This may mean that Shaun Marsh would miss out, despite doing well for Punjab. George Bailey and Johnson occupy the other foreigner slots and they won’t tinker with it. The opening combination is settled in Virender Sehwag and Manan Vohra.

Punjab have also a tussle between Karanveer Singh and Shivam Sharma, the two young spinners. On this spinning surface, they would go well to bring in one of them and help Akshar Patel take wickets.

Kolkata too would bank on their top order. With nine consecutive 40-plus scores, Robin Uthappa is in brilliant form and he would lead their charge against this unit. Gautam Gambhir may not have scored a lot in the last few games, but has found his touch. Pathan’s return to form is good news and they would now use him as a floater in the batting order, according to the situation.

Sunil Narine and Shakib Al Hasan would be the main spinners and have the task of limiting the opposition. Kolkata may add to that by bringing in Chawla, by dropping Vinay Kumar. Umesh Yadav and Morne Morkel would be the seam bowlers in this side, with Ryan ten Doeschate chipping in.

Punjab have qualified for the second stage for the first time since the maiden season. Kolkata make it through exactly two years after their IPL triumph. Considering the fact that it is their home ground, Kolkata may be the favourites for this competition. 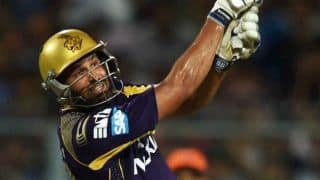