Both teams head to Hyderabad for the tenth clash after strong wins in the previous games.

Kolkata Knight Riders (KKR) and Perth Scorchers face off in the tenth encounter of the ongoing Champions League Twenty20 (CLT20), with Kolkata leading the Group A table with eight points from two wins and both teams yet to face a defeat in the tournament so far. Catch

KKR head to the Rajiv Gandhi Stadium in Hyderabad in high spirits after getting the better of the Lahore Lions in the seventh match of the tournament by four wickets. The Perth Scorchers play their second match in the current edition of the CLT20 after registering a memorable win against the Dolphins in which they pulled off a memorable chase of a target of 165 runs. 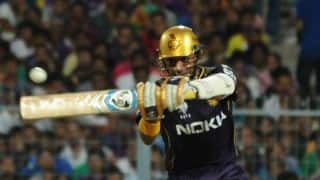