Currently, KKR are 62 for the loss of two wickets in eight overs with opener, Gautam Gambhir 30.

Defending champions, Kolkata Knight Riders (KKR) batsmen look to settle down and bat comfortably in order to reach the target comfortably as well, during their chase against Delhi Daredevils (DD) in match 17 of the Indian Premier League (IPL) 2015 at the Feroz Shah Kotla Stadium in Delhi on Monday. Currently, KKR are 62 for the loss of two wickets in eight overs with opener, Gautam Gambhir 30 and Suryakumar Yadav on 13. LIVE Scorecard: Delhi Daredevils vs Kolkata Knight Riders 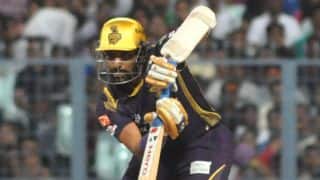