Umesh Yadav was named the Man of the match for his fiery spell.

A clinical performance by Kolkata Knight Riders (KKR) outclassed Sunrisers Hyderabad (SRH) in Eden Gardens, as the hosts won the match 38 of Indian Premier League (IPL) by a healthy margin of 35 runs. Chasing a target of 168 to win, SRH only managed to score 132 for nine in their allotted 20 overs. With this victory KKR’s net run-rate is boosted significantly and they have reclaimed the No. 3 position in the points table. For SRH, it was a day to forget. Blog : KKR vs SRH, IPL 2015, Match 38

At the halfway stage, the target of 168 for SRH was looking a challenging one but SRH had quality batters likes of David Warner, Shikhar Dhawan, Eoin Morgan on their ranks who could have made a match out of it. But they messed it up the chase big time. A fiery first over by Umesh Yadav, in which he cleaned up Warner and Naman Ojha pushed the visitors on the backfoot initially, later couple of run-outs put SRH out of contest completely. Especially losing Eoin Morgan through a run-out hurt them the most. Dhawan played a poor shot to get out at a crucial juncture of the match, this also pegged SRH back. Scorecard KKR vs SRH, IPL 2015, Match 38

Moises Henriques played a fighting knock but it was too little too late. For KKR the old fox Brad Hogg once again bowled a tightly spell. His figures of 2 for 17 in four overs was crucial for Gautam Gambhir’s team’s success. What a replacement he has been for Sunil Narine. The other spinner, Piyush Chawla gave way only 16 runs in his four overs and got one important wicket. These eight overs were like the the knockout punch for the home side. Johan Botha, the third spinner in the team also bowled few tight overs in his first spell.

SRH just couldn’t recover form their early blows. They tried to hit their way out of trouble but only slumped further. In the 12th over the men in orange were 69 for six. Karn Sharma hit three back to back sixes to Botha, but it was too little too late. Ultimately they fell shot by 35 runs.

Earlier, the spin twin of Karn and Bipul Sharma, brought SRH back in the game as they restricted a dangerous looking KKR to 167 for seven after Warner won an crucial toss and interestingly decided to chase on pitch which was looking quite dry. The visitors made two changes in the playing eleven from the last game. Bipul was brought in for Ashish Reddy and most surprisingly Dale Steyn, came in for Trent Boult. For KKR,  Botha replaced Pat Cummins. This change made sense as SRH have few left-handers on their ranks.

KKR had an excellent start of the game as both their openers Robin Uthappa and Gambhir propelled the Knights in the first six overs. They took on the new bowlers of SRH, including Dale Styen. Bhuvneshwar Kumar got some movements out of the track in the first over but that didn’t trouble Gambhir and Uthappa. They enjoyed the extra pace of the medium pacers. At the end of first six over, KKR were 55 for no loss.

However, the tide turned the other way as soon as the spinners were brought in. In the very first over of spin, Kran got rid of Gambhir. The KKR skipper was trying to taking on the leggie, but only managed to offer a easy catch at the deep square leg. Warner brought in Bipul from the other end. Spinners were bowling in tandem. That brought the run rate down significantly.

Uthappa was the next man to go, thanks to a brilliant catch by Warner in the inner circle. But the biggest blow for them was the wicket of Andre Russell. The in form KKR batsman tried to take on Bipul but get caught in the long on. KKR were struggling at 86 for three.

Manish Pandey was looking in good touch as he timed the ball well and hit some lusty blows. But unfortunately he was ran out following a misunderstanding at the middle with Ryan ten Doeschate. As wickets kept tumbling at the one end, Yousuf Pathan played a handy knock of 3o off 19 balls, late in the innings as KKR finished with 167 for seven, which is challenging total on this pitch.

The only moment of concern for KKR during the game was the injury scare of Russell. The West Indian all-rounder hurt his shoulder when tried to make a diving save in the boundary. He was looking in discomfort and was out of the field for sometime. But during the ending moments of the game, Russell came back to field and bowled the 2oth over of the SRH innings and also took a wicket. This would have relieved the KKR team management.

Whereas for SRH this was bad day in the office. After this lose now they are placed at No 6 in the points table. There are five more games left for them. So to qualify for the last four stage, SRH now have to win atleast four of those.

Man of the match: Umesh Yadav 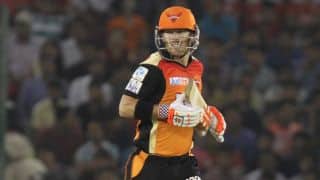 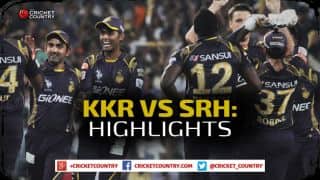