High on confidence after tasting victories in their tournament openers, both Kolkata Knight Riders and Rajasthan Royals will look to extend their winning run when the two teams square-off in the Pepsi Indian Premier League match at Jaipur on Monday. 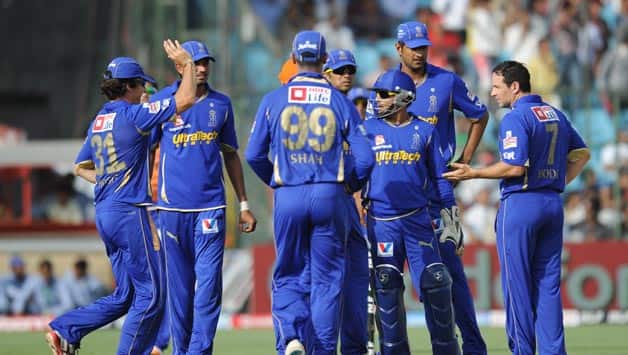 The Rajasthan Royals, who have looked awry since their inaugural edition feat, will take confidence from the fact that they had beaten Kolkata Knight Riders by 22 runs at the same venue exactly a year ago in previous edition of the cash-rich event © AFP

High on confidence after tasting victories in their tournament openers, both Kolkata Knight Riders and Rajasthan Royals will look to extend their winning run when the two teams square-off in the Indian Premier League match at Jaipur on Monday.

While the defending champions KKR beat Delhi Daredevils comfortably by six wickets in a low-scoring match in the tournament opener, the Royals eked out a five-run win over the same opponents in their first game.

The Royals, who have looked awry since their inaugural edition feat, will take confidence from the fact that they had beaten KKR by 22 runs at the same venue exactly a year ago in previous edition of the cash-rich event.

Add to it, their last outing against the Daredevils when skipper Rahul Dravid struck a 51-ball 65 and Stuart Binny chipped in with quickfire 40 off just 20 balls to help the team, would also give them an edge.

However, the fact that they were lucky to have scrapped through against a depleted Delhi-side and were unable to tighten the noose at crucial moments, will play in their mind.

Both openers Ajinkya Rahane (28) and Kusal Perera (14) got starts but failed to convert them into big scores.

Despite Dravid, Rahane and Binny in good nick, Royals were unable to give necessary thrust to their innings.

The hosts, however, would be bolstered by the presence of explosive Australia all-rounder Shane Watson at the top of the order, who is expected to take the field tomorrow at the Sawai Man Singh Stadium.

But the team might just have a fitness worry with 40-year-old Dravid pulling a calf muscle yesterday and did not field for the better part of Delhi run-chase.

The former India captain though had assured that he would try his best to play against the KKR.

“It was severe bout of cramps. I will do everything to play the next match [against KKR] but I need to see that how I get up tomorrow and if there’s any stiffness,” Dravid had said after the match against Delhi.

Royals’ bowling also lacked the penetration and it was left to Kevin Cooper [three for 30] to restrict the opponents who needed only nine runs from the last over.

The team will be hoping for Shaun Tait, S Sreesanth, Samuel Badree and the likes to come good with the ball.

KKR, on the other hand, with their allround strength will be looking to avenge their last year’s defeat. And they would certainly fancy their chances against the Royals.

Even though the Knight Riders chased down a modest total of 129 against Delhi, skipper Gautam Gambhir, Jacques Kallis, Manoj Tiwary, Eoin Morgan and Yusuf Pathan — all showed their potential and the visitors would hoping to dominate Royals’ not-so-impressive bowling lineup tomorrow.

As far as KKR’s bowling is concerned, their ‘mystery’ spinner Sunil Narine, who with his brilliant figures of four for 13 had kept the Daredevils under tight leash, will be a force to reckon with.

The West Indian had scalped 24 wickets in the last edition of IPL to finish as the second highest wicket-taker behind Morne Morkel.

Besides, Australian veteran Brett Lee, who has doubled up as a bowling mentor in absence of Wasim Akram, will spearhead the pace attack.

Adding variety to the attack will be Laxmipathy Balaji and all rounders Jacques Kallis, Rajat Bhatia and Laxmi Ratan Shukla.

They all had a good outing against Delhi and would look to fire in unison once again.

Rajasthan Royals will have to raise the bar if they want to thwart the defending champions.

Meanwhile, the Rajathan Cricket Association curator Taposh Chatterjee feels that the wicket will be ideal for a Twenty20 game but dew might play a role in the later part of the evening.

“We got the ground a bit late but with the kind of equipment at our disposal we could have ground and wicket in good shape. We have the resources to minimise the affect of dew,” he said.