It was a sweet revenge for Kolkata Knight Riders as they defeated Rajasthan Royals by five wickets in closely-contested IPL match on Friday. 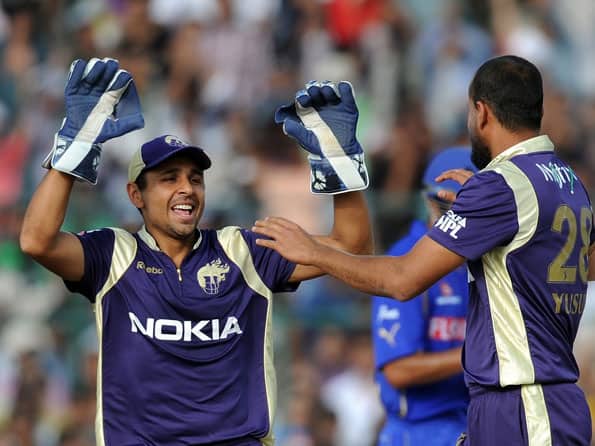 It was a sweet revenge for Kolkata Knight Riders as they defeated Rajasthan Royals by five wickets in closely-contested IPL match on Friday. With this win, KKR rose to fourth position in the IPL points table

Rajasthan had defeated KKR by 22 runs in their earlier meeting a few days back.

Chasing a target of 132, Kolkata Knight Riders reached the target with four balls to spare thereby notching up their second victory in the cash-rich league.

With 15 needed off the last two overs, Shakbi Al Hasan (16) hit a hige six over deep mid-wicket off Amit Singh get KKR close to the target.

Shakib got out off the very next delivery but a delicate late cut from Yusuf Pathan levelled the scores with only a single needed off last over. It was left to Ryan ten Doeschate, who hit a huge six off Ankit Chavan over deep square leg to clinch the issue.

First was an inside-out hit over extra cover while the next was square cut. However, Gambhir responded a touch late to a call for single by Kallis as Rahul Dravid’s direct show found his opposite number well short.

With pitch offering a fair bit of turn but KKR batsmen didn’t stop playing shots knowing fully well that getting bogged down was like inviting trouble.

Bisla played and missed a few but in between hit a few boundaries. Kallis hit the best shot of the day — straight drive off medium-pacer Amit Singh.

Kallis who scored 31 was playing the role of a sheet anchor to perfection when he was declared leg before off Botha when he tried to sweep against the turn.

Opting to bat on a slow Eden strip, Royals made a cautious start before the skipper Rahul Dravid broke the shackles along with Ajinkya Rahane.

But the KKR slow bowlers with wrecker-in-chief Shakib (3/17) broke the 45-run opening partnership as the Royals found it difficult to break free.

Ashok Menaria (1) and Rahul Dravid (28) were also dismissed in quick succession as Royals were reduced to 49 for three in the ninth over.

Owais Shah was the top-scorer for Royals with 31 from 33 balls (3×4) as the former England batsman along with Shreevats Goswami put on 59 for the fourth wicket to repair the top-order damage.

There were only two sixes in the visitors innings, something that summed up the nature of the track. In what is seen as his last appearance at the majestic Eden Gardens, Dravid showed flashes of brilliance from his golden days.

He even came down the pitch on more than one occasion and hit Kallis on the rise during his delightful but short innings.

The old and young combination of Dravid and Rahane seemed in little trouble after a tentative start as they broke free in Narine’s first over, hitting the West Indian off-spinner for 10 runs.