The Royal Challengers Bangalore (RCB) have been set a target of 178 by the Kolkata Knight Riders (KKR) in the fifth match of the IPL 2015 at the Eden Gardens in Kolkata. Skipper Gautam Gambhir was again the star performer for KKR with the bat as he made a calculated 58 runs. The RCB have an array of star batsmen and they will fancy their chances in the match. LIVE UPDATES: Kolkata Knight Riders vs Royal Challengers Bangalore

The RCB bowlers had a torrid time to begin with. They strayed down the leg side way to often and Gambhir and Robin Uthappa capitalised on their inaccuracy very well. They kept the scoreboard ticking and got the boundaries at regular intervals. RCB’s fielding was also very ordinary and there were plenty of mis fields in the early overs. LIVE SCORECARD: Kolkata Knight Riders vs Royal Challengers Bangalore

In fact Gambhir’s fifty wouldn’t have been possible if one of the best fielders in the world, AB de Villiers had not dropped him when he had scored 30-odd runs. RCB finally made a breakthrough only in the 11th over when Uthappa miscued one to long on. Gambhir then fell to Chahal for 58. Among the bowlers, only Chahal showed real intent and courage and wasn’t afraid to toss the ball up. IPL 2015: Complete Coverage

Even Abu Nechim bowled very well and not only did he maintain a chokehold but also got the important wicket of Uthappa when the latter was ready to launch. The fast bowling trio of Varun Aaron, Sean Abbott and Harshal Patel were relatively ineffective.

The wickets of Gambhir and Uthappa brought in Suryakumar Yadav and Manish Pandey. Yadav didn’t quite get going the way he would have like to and got out for 11 off 9 balls. Pandey, on the other hand, settled into his role quite well but lost his wicket to careless running after scoring 23 off 15 balls.

Andre Russell gave the innings the final blast in the end and was looking to smash everything outside the park and did to great effect. He offered a chance once but the two fielders were undecided on who would take it and it fell in between them. He ended with 41 off 17 balls taking KKR past 175. 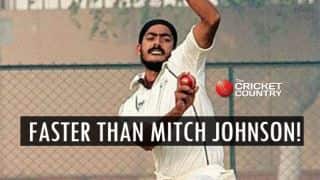