KKR will look to beat KXIP and make a case for themselves for a top four finish.

Defending champions, Kolkata Knight Riders (KKR) will be taking on runners-up of the previous edition, Kings XI Punjab (KXIP) in Match 44 of the 2015 Indian Premier League (IPL) at Eden Gardens on Saturday. This would be the 12th match for KKR, while KXIP play their 11th game of the season. IPL 2015: Piyush Chawla says attacking the batsmen comes naturally to him

With KXIP have already been eliminated, KKR will be trying to make sure they book a seat in the qualifiers by beating the runners-up, whom they beat last year in the final. KXIP, who sit at the bottom of the table with just a couple of wins, will be playing merely for honour.

KKR were on top in their last game against Delhi Daredevils (DD) on Thursday. With a 13-run win, KKR retained the third spot of the table. The top performers from the match were Yusuf Pathan, who played a quickfire 42 and also a healthy 32 from Robin Uthappa; they ensured KKR set-up a commanding total of 171. Then Piyush Chawla claimed 4 for 32 to ensure the KKR victory. Sunil Narine cleared to bowl by BCCI with a final warning

KXIP, on the other hand, were on a low again against RCB in their last game. They dropped Chris Gayle early and his ton propelled RCB to a mammoth total of 226. KXIP were bundled for just 88 in the chase as they lost the game by a massive 138 runs. Most batsmen failed to fire and most of them ere dismissed for a single figure, with only Akshar Patel firing an unbeaten 40 off just 21 deliveries.

With the next game being held at Eden Gardens, it is expected that the pitch will act slow and the spinners would be in focus again. KKR, who went in with four specialist spinners in the last game, are most likely to retain the same squad. On the other hand, it is most likely that a couple of changes are expected for KXIP. IPL 2015: Bangar rues dropping Gayle cost KXIP against RCB

Despite their lackluster performance, KXIP have the ammunition to fire out and outplay any opposition. It is just that they have not clicked at the right time. However, KKR, the defending champions and currently running a good form, will surely be a tough team to beat, and the home advantage is surely to come in their favour that makes them have the upper hand, moving into the game. 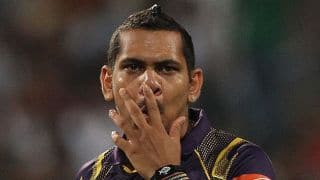