Kolkata Knight Riders vs Rajasthan Royals, IPL 2015 Match 25 at Kolkata called off due to rain

Kolkata Knight Riders vs Rajasthan Royals, IPL 2015 Match 25 at Kolkata called off due to rain

Rain and thunderstorm began around 2pm, two hours before the scheduled start of the play as the entire ground remained under cover.

Kolkata: Defending champions Kolkata Knight Riders’ (KKR’s)  home match against Rajasthan Royals (RR) as abandoned at Eden Gardens without a ball being bowled because of heavy rain and thunderstorm, in Kolkata on Sunday. Field umpires Richard Illingworth and Rajesh Deshpande took the final call after their fourth inspection at 6.50pm as the home and visiting team captains Gautam Gambhir and Shane Watson were seen shaking hands and players moving out with their kits. Blog: KKR vs RR, IPL 2015 Match 25

The bad news for the anxious packed crowd finally came at 7.15 pm when it was announced that the match was abandoned and the ticket amount would be refunded April 28 onwards. Both teams were awarded one point each as RR benefited from the result by climbing up to the top of the table replacing Chennai Super Kings (10 points) with 11 from eight matches. KKR on the other hand stay at third place with seven points from six matches. Full Scorecard: KKR vs RR, IPL 2015 Match 25

Earlier rain and thunderstorm began around 2pm, two hours before the scheduled start of the play as the entire ground remained under cover. The rain caused by a cyclonic circulation over Jharkhand and adjoining South Bengal persisted for about three hours. The rain stopped around 5pm pressing groundsmen and three super soppers into action and the covers were removed one after another.

Fortunately the rain had stopped completely to cheer the packed Eden crowd who had sat patiently and some had come drenched with optimism. It took about one and half hour for the covers to be completely off but there parts of the ground between the dug outs and the boundary area remained under puddle of water, which may have alarmed both the team’s captains.

Led by curator Probir Mukherjee, the groundsmen tried their best to remove the waters but it still remained soggy with a few wet patches for the match to happen. The cut-off time of the match was 7.20pm but they captains and umpires decided on to call it off after a long chat with the curator around 7.05pm. 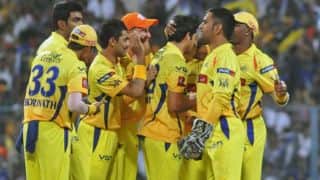