Kolkata Knight Riders will be eager to get back to winning ways and inflict more pain on Royal Challengers Bangalore's inconsistent run in IPL 10.

It was a rare sight for Kolkata Knight Riders (KKR) to lose a home game. Ever since the setback received against Mumbai Indians (MI), KKR were ticking all the boxes right before Gujarat Lions (GL) halted their progress in Indian Premier League (IPL) 2017. Nonetheless, Kolkata Knight Riders will like to get act together when they host a misfiring Royal Challengers Bangalore (RCB) on Sunday. Virat Kohli-led side will like to come hard against Gautam Gambhir’s well-oiled XI with the overall head-to-head record tied at 10-9 in favour of hosts. Full Cricket Scorecard, Kolkata Knight Riders vs Royal Challengers Bangalore, IPL 2017, Match 27

KKR have been smart buyers since revamping their side in 2011. Gambhir and co. have stuck with their core members, bought some useful foreigner players and used them judiciously as well. KKR have some settled faces in the form of Manish Pandey, Robin Uthappa, Yusuf Pathan, Suryakumar Yadav, Piyush Chawala and Umesh Yadav. To top it all, Kuldeep Yadav, Chris Woakes, Trent Boult and Chris Lynn have joined the party and contributed in wins as well. Gambhir is not likely to tinker much with his line-up, despite the drubbing received against GL.

Gambhir will open the innings with his new partner Sunil Narine. The West Indian has been given the full license to go after the opposition bowlers in the powerplay overs and initiate a solid start. Narine has done justice with the ‘pinch-hitter’ tag with blitz against Kings XI Punjab (KXIP) and GL. He will like to come hard against RCB’s inconsistent bowling line-up. Robin Uthappa, Manish Pandey, Yusuf Pathan and Suryakumar Yadav will come in at No. 3, 4, 5 and 6 respectively. There may be some changes in the order according to situations. Talking about KKR’s vice-captain, Suryakumar, will like some runs under his belt who has been a non-performer in this edition.

Shakib-Al-Hasan played his first game of the season against GL on Friday. He is expected to come at No. 7 followed by Woakes, Kuldeep, Umesh and Nathan Coulter-Nile. Shakib was out of sorts in his first appearance in IPL 10 and the team management may replace him with Boult. The Kiwi pacer may trouble Chris Gayle early in the innings. Nonetheless, if they resist with Shakib, KKR are likely to play the same XI. KKR s bowling gives them enough blanket to restrict a starry batting line-up of RCB. With the likes of Woakes, Boult/Shakib, Kuldeep, Umesh, Narine and Coulter-Nile, there is no stopping the hosts.

RCB are languishing at the bottom half of the points table. With some uninspiring performances and injuries, RCB still not roared in IPL 10. However, with a victory against GL in their last tie, Royal Challengers Bangalore will like to maintain momentum while travelling. Kohli will continue to open the innings along Gayle. The Caribbean batsman finally got some runs in the tenth edition and became the first player to cross the 10,000-run mark in T20s. He will be hopeful of making a mark against a better bowling line-up than GL.

AB de Villiers’ missed RCB’s last game due to a shoulder injury. Nonetheless, Yuzvendra Chahal has stated that the South African may make it for the clash against KKR. If he comes in, Travis Head will again have to sit out despite vital contributions. De Villiers will come at No. 3 followed by Kedar Jadhav, Mandeep Singh, Shane Watson and Stuart Binny. Binny and Mandeep will have to pull up their socks and raise the bar in the upcoming matches.

Pawan Negi will be their last recognised batsman at No. 8. Sreenath Aravind, Chahal and Adam Milne will be the prime bowlers for RCB. Tymal Mills is expected to return as well, but RCB may continue to go with Milne.

KKR are down with a defeat but things are expected to turn around on Sunday. Their head-to-head record versus RCB at home will also bolster them ahead of the clash. With a win ratio of 4-3, Gambhir’s side start as favourites. Nonetheless, RCB have got the better of their opponents in the last two meetings at Eden Gardens. Expect a cliff hanger when these two starry sides clash on Sunday. 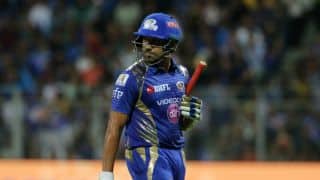 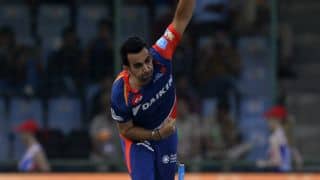